Machines like these, called Xavier, may ultimately just be mobile extensions of surveillance systems. 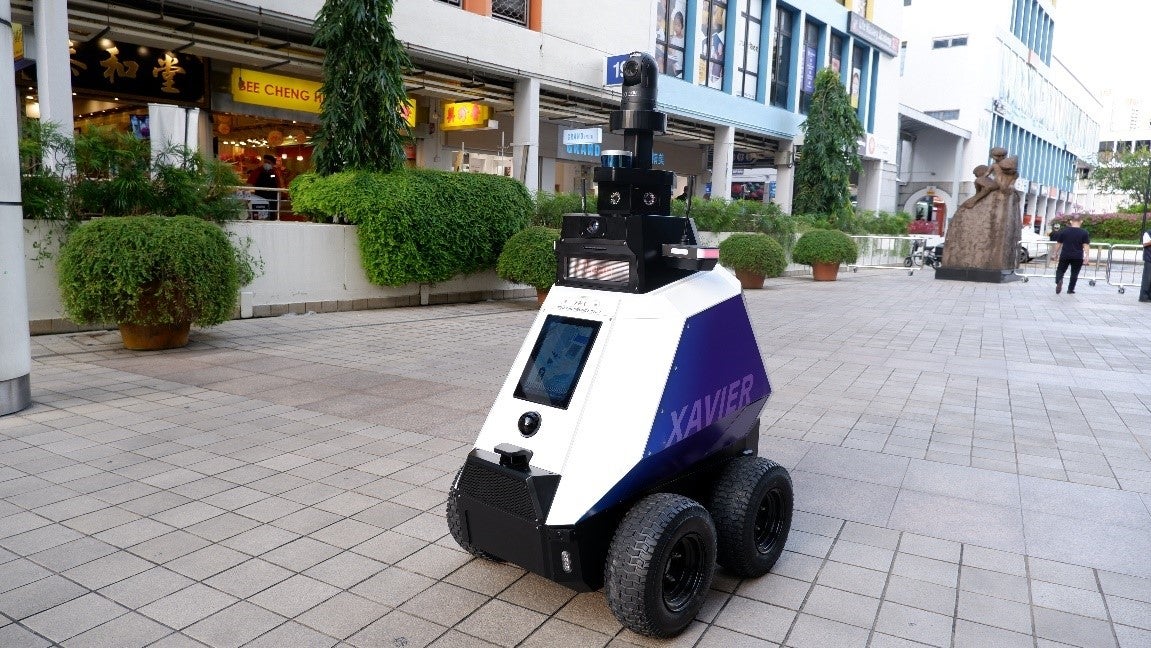 For the next three weeks, police in Singapore will be aided in their duties by a pair of robots. Far from the armed and intimidating robot cops of popular science fiction, these small machines, both named Xavier, will instead be on the lookout for nuisance crimes. It is a high-profile demonstration of the act of shifting the burdens of policing from fallible humans to fallible machines, with a promise of cost savings in the process.

The Xavier robot is an autonomous wheeled vehicle, with a camera array mounted on top. It was built by Singapore’s Home Team Science and Technology Agency (HTX), which is tasked with designing technology for national security and public safety.

Among Xavier’s duties, according to the HTX, will be to traverse a specific popular shopping plaza, looking for “undesirable social behaviours” like “smoking in prohibited areas, illegal hawking, improperly parked bicycles within HDB Hub, congregation of more than five people (in line with prevailing Safe Management Measures), motorised active mobility devices and motorcycles on footpaths.”

Once it detects that activity, a Xavier robot will send an alert to a command and control center, where humans can make an appropriate decision. In addition, the big tablet embedded in the front of the Xavier robot will display a message to the people who are presumably violating the law to try to “educate the public and deter such behaviors.”

As such, Xavier isn’t quite a robot cop. Nor is it even, really, a robot meter reader. It is instead a police aide, a mobile sentry camera and alert system whose powers of enforcement extend to calling for backup and playing safety infomercials.

Plus, two-way communications allow human officers back at the police station to communicate with people through Xavier, though the robot can also play pre-recorded messages.

To navigate, the robots are built with an array of sensors, and then trained on data about the environment. For the detection of activities like smoking or selling goods by shouting, the Xavier robots will film the activity and then process the image with “deep convolutional neural networks and software logics,” matching it to existing data.

Some of the sample data was collected by engineers walking the cameras through the shopping plaza that the Xavier robots will patrol. Other data for the training was built virtually—synthetic data designed to simulate the real deal.

The Xavier robots also draw on HTX’s experience with the Multi-purpose All-Terrain Autonomous Robots (MATAR), which were first deployed alongside Singapore police in 2018. These robots saw regular use alongside police patrolling parades in 2019 and 2020, and with the start of the COVID-19 pandemic, they were used to patrol the housing complexes where migrant workers live.

Like MATAR before it, the real utility of Xavier is how it can shift some of the more routine and repetitive tasks of police to a machine. With human officers in a command center watching several robots, human interaction can be saved for when it is needed to change the situation. If the moment goes poorly, and people flee or attack the robot, humans can respond with full knowledge of what happened, rather than having to adjust on the fly.

That said, other robots used for similar routing security purposes have largely come up well below their stated expectations. The Knightscope robot, a kind of autonomous obelisk on wheels with a camera, is pitched as being cheaper to operate than human security guards, and with better memory. It’s been rented out since 2015 to patrol areas like a college campus in Arizona or parking lots in California. In 2017, a Knightscope robot famously fell into a fountain in an office building in Washington, DC. Yet the actual record of its success when deployed is deeply underwhelming, with the sensor-rich robot failing to successfully lead to the arrest of someone for the crime of tipping the robot over.

Both the Air Force and NYPD have rolled out dog-shaped robots for security patrols. The Air Force’s machine, by Ghost Robotics, is designed to perform base security, functioning as a detection and warning system for keeping people away from places that are unsafe or off-limits. The Boston Dynamics Spot robots, tested by NYPD and others, are instead designed to work alongside people and among civilian populations. The threshold for error and discomfort in that role is much greater, which partially explains why NYPD ended its work with the robot-shaped dog.

Singapore’s police robots appear at least to come packaged inside a public outreach campaign, with the robots themselves capable of displaying explanations for what it is doing. The challenges faced by police—of balancing the enforcement of small crimes with routine presence patrols—are likely only going to increase, and robots could be part of how police forces meet that burden at a lower cost than hiring people.

Yet the Xavier robot’s ultimate utility may be as a moving reminder of existing surveillance systems. Singapore, which already boasts 90,000 police surveillance cameras, announced last month a plan to install 200,000 more cameras.

Watch a video of MATAR in action, below: