This app is helping Californians stay on top of wildfire risks

An inside look at Watch Duty, a website called The Lookout, and a citizen-led quest for better information about fire dangers. 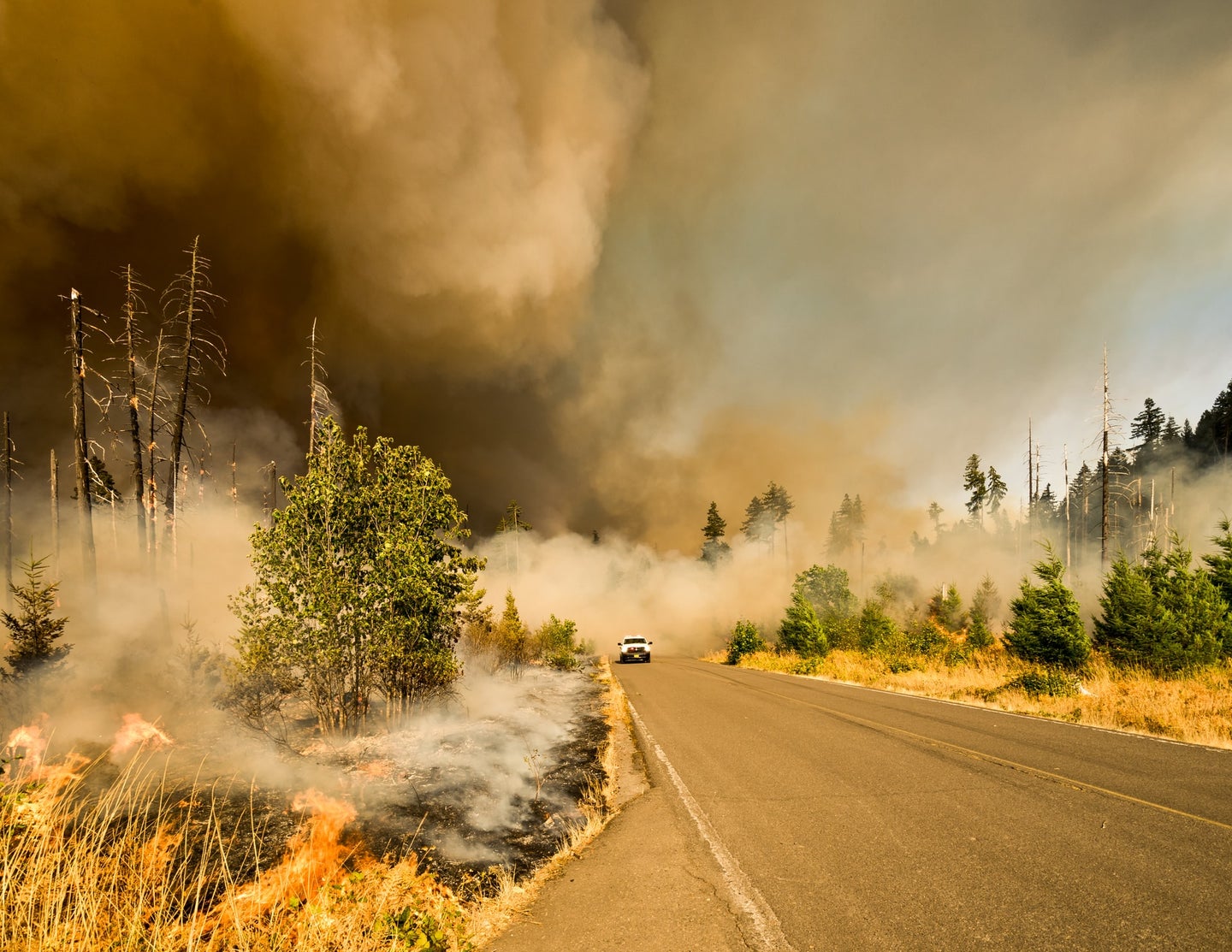 Some Californians wanted better information about wildfire risks, so they created their own outlets. Photo by Marcus Kauffman on Unsplash
SHARE

In 2020, John Mills’ house in Sonoma County, California was in the path of the Walbridge Fire. After evacuating, he began scouring the internet for all the updates he could find about the blaze, only to find himself refreshing the same outdated maps and watching the same soundbites on the news over and over. The lack of information fueled his anxiety over the situation, Mills says, and became a turning point for the way he understood what it means to live with wildfires.

After being fortunate enough to return home—his house was fine—he began seeking ways to become more educated about both fires and emergency response. He took wildland firefighting courses, went on ride-alongs, and toured a 9-1-1 call center; throughout it all, he kept returning to the idea of wanting better communication during critical moments. So, he decided to use his background as a software engineer to create an app that would address the issue.

The following summer, he released Watch Duty, a free app that displays a map of active wildfires and sends users push notifications alerting them if a potentially threatening fire is in their vicinity. Within two days, Mills says it gained 22,000 users in the three Northern California counties it covered. Within one month, he says it had 80,000.

Watch Duty’s August 2021 launch coincided with “unprecedented fire conditions” in California, as the state’s firefighting agency described it. The Dixie Fire, the second-largest wildfire in known state history, had already been burning for more than a month; other conflagrations were working their way through different swaths of the state. Tens of thousands of people were under evacuation orders, told to leave their homes behind with little to no knowledge of when or if they would be able to return.

Many shared the hunger for more information Mills experienced during his evacuation, using Facebook groups and Twitter hashtags to crowdsource intel. Zeke Lunder, an analyst with two decades of experience mapping wildfires, was already in the habit of sharing his expertise on Facebook, often writing posts providing insights into official announcements. This fire hit close to home, though, and he wanted to expand his offerings. Lunder started a website, The Lookout, which he populated with maps he built based on publicly available data, as well as analysis and interviews. Rather than offering emergency alerts, like Watch Duty, Lunder wanted a space to provide additional context for people interested in, and impacted by, wildfires—context that was not restricted by official protocols or talking points.

With wildfires now burning larger and hotter than before, their threat intensified by climate change and a century of suppression and management practices, there’s a growing recognition that new approaches are needed to mitigate future risk. But for many from communities on the frontlines, there’s also a desire for better ways to learn about the heightened threats they face— a need both Watch Duty and The Lookout are part of a growing effort to fulfill. While their missions differ, both incorporate the human experience of having been through fires, and understanding the toll that trauma takes.

“I definitely feel like there’s a new consciousness—so many people have been evacuated, even in the last four years,” Lunder says. “There’s this multi-layered crisis unfolding with wildfire, and the interest is kind of exploding.”

For those looking to monitor the movements of wildfires, there are an already overwhelming amount of options available. A number of federal agencies offer maps, reports, and alerts, as do various regions, states, and localities; plus there are unofficial websites, apps, forums, and accounts across social media platforms.

There’s “Fire Twitter,” as the various fire-following accounts are known, which provides thousands of people with a steady stream of curated alerts; many in the path of fires post about their experiences, rounding out official accounts with crowdsourced updates. One study from the US Forest Service even found a map of geo-located tweets provided a pretty accurate map of smoke patterns. And on Facebook, there are numerous fire-focused groups and pages.

The challenge, Lunder says, is making sense of it all. With his knowledge of wildfire and his technology skillset, as well as his connections to firefighters in the field, he is able to interpret multiple data streams to inform his maps on The Lookout. During the 2021 Dixie Fire, for example, Lunder utilized raw data from infrared mapping flights flown over the fire to create more detailed maps.

“A lot of sites use satellite heat detections. That’s the most common kind of intel that’s being shared now on web apps, and it’s not super accurate,” Lunder explains. He remembers one such report panicking residents who believed a wildfire had jumped across a highway, when really, the satellite just wasn’t that exact.

But inaccurate information is a particular concern on social media, and Brian Ferguson, the deputy director for crisis communication and public affairs for the California Governor’s Office of Emergency Services (Cal OES), says officials are aware of incidents in which people ended up in “really tough situations” after making choices based on unverified tweets.

“When it comes to life-or-death information, we still tell people that the only official source is from your local law enforcement or fire places, because when it comes to whether or not to evacuate, whether or not to make decisions that have public safety or life-impacting choices for your family, absolutely, it’s critical to have the right information,” Ferguson says.

Sara Paul, who manages Sonoma County Fire Updates—a Facebook group with nearly 14,000 members—believes unofficial communities can actually help people avoid misinformation and panic. In the past decade, Sonoma County has experienced three of the 10 most destructive wildfires on record in California history, and Paul says many of her neighbors have become savvy at navigating the various information options available to them, like Broadcastify and PulsePoint. But it can become overwhelming to try to monitor multiple streams of information, and as Lunder noted, those without expertise might not be able to properly interpret all the alerts. Condensing this information down to what people can use is part of Paul’s goal for her group.

“It got to a point where it’s like, okay, let’s do this right. Let’s make sure we’re listening to the scanner calls, make sure we are checking in with local authorities before we put anything out that, you know, is going to put people in a panic,” Paul says, of her approach.

The 2017 Tubbs Fire was Paul’s turning point—she had no prior experience or knowledge in the wildland fire space. She has devoted countless volunteer hours in the years since towards sharpening her understanding of wildfire alerts and sharing updates with her online audience. Most of her intel comes from listening to scanners and air traffic, as well as watching the growing network of wildfire cameras that have been installed in strategic spots across the state.

Last year, Mills approached Paul to lend her expertise to Watch Duty as one of its “citizen reporters,” responsible for curating the information posted in the app. Others Mills recruited include journalists, firefighters, and people with emergency services experience. Paul found the premise exciting, particularly the ability to work with others to vet information and to be able to send alerts to residents, rather than having to hope her posts were surfaced by a social media algorithm.

“Just to be able to say, ‘Hey, I need you, elderly neighbor, to put this one app on your smartphone, I’m going to set it up for you, and you don’t have to think about anything – but when it makes noise, you need to look at it, right?’” Paul says. “That’s been such a huge game changer.”

Mills says Apple recently approved them to issue critical alerts, which are louder and can also break through “do not disturb” modes. And, as of June 1, the app will be available to residents across the entire state. Paul is one of 15 volunteers that will keep it populated behind the scenes, operating largely out of a Slack channel where the citizen reporters share information. They’re also responsible for vetting user-submitted photos, which must be taken through the app and are stamped with location coordinates in an effort to ensure accuracy and inform the reporting.

“We just want to give people peace of mind and give them information so they can make informed decisions,” Mills says. “It is not complex by design. It’s very simple, it’s very easy to operate.”

Both Mills and Lunder see their platforms as opportunities to enhance public understanding rather than compete with official alerts, though neither shies away from criticizing the current system.

“I think it’s important to be able to have these honest conversations about the limitations of our firefighting in this new era of climate change,” Lunder says.

For Mills, the frustration comes more from the timing of alerts, particularly when it comes to issuing evacuation orders, which he believes can put people in more dangerous situations than necessary.

“If they can move calmly, that is ideal,” Mills says. “When this happens too late, and people start running and panicking, they get hurt. They get in an accident, they block the road, and things start to escalate.”

Ferguson, of Cal OES, says officials understand the need for wildfire information has changed in recent years and notes that the state has been employing new tech tools to aid in their understanding and subsequent ability to provide timely updates, including flying reconnaissance aircrafts over fires and employing real-time firetruck tracking.

“We want the public to understand we’re evolving quickly, too,” he says. But in these rapidly-changing situations, Ferguson maintains that there is still the need for a verification process before releasing information.

For residents looking to enroll in emergency alerts, there are separate options for federal, state, and local alerts, and specific offerings can differ widely depending on where you live. Both Watch Duty and The Lookout have aspirations to expand outside of California – but for now, their focus is on serving their existing audiences heading into the hotter, drier months.

“So many people in the area where I live are in incredibly dangerous places,” says Lunder. “There’s a recognition of that and there’s this desperation, people wanting to become informed and empowered to work on reducing hazards.”