The UK’s wee military recon drones will double as cartographers

The Ministry of Defence is spending some $3.8 million to purchase small, smart drones that can build maps and help provide info to people on the ground. 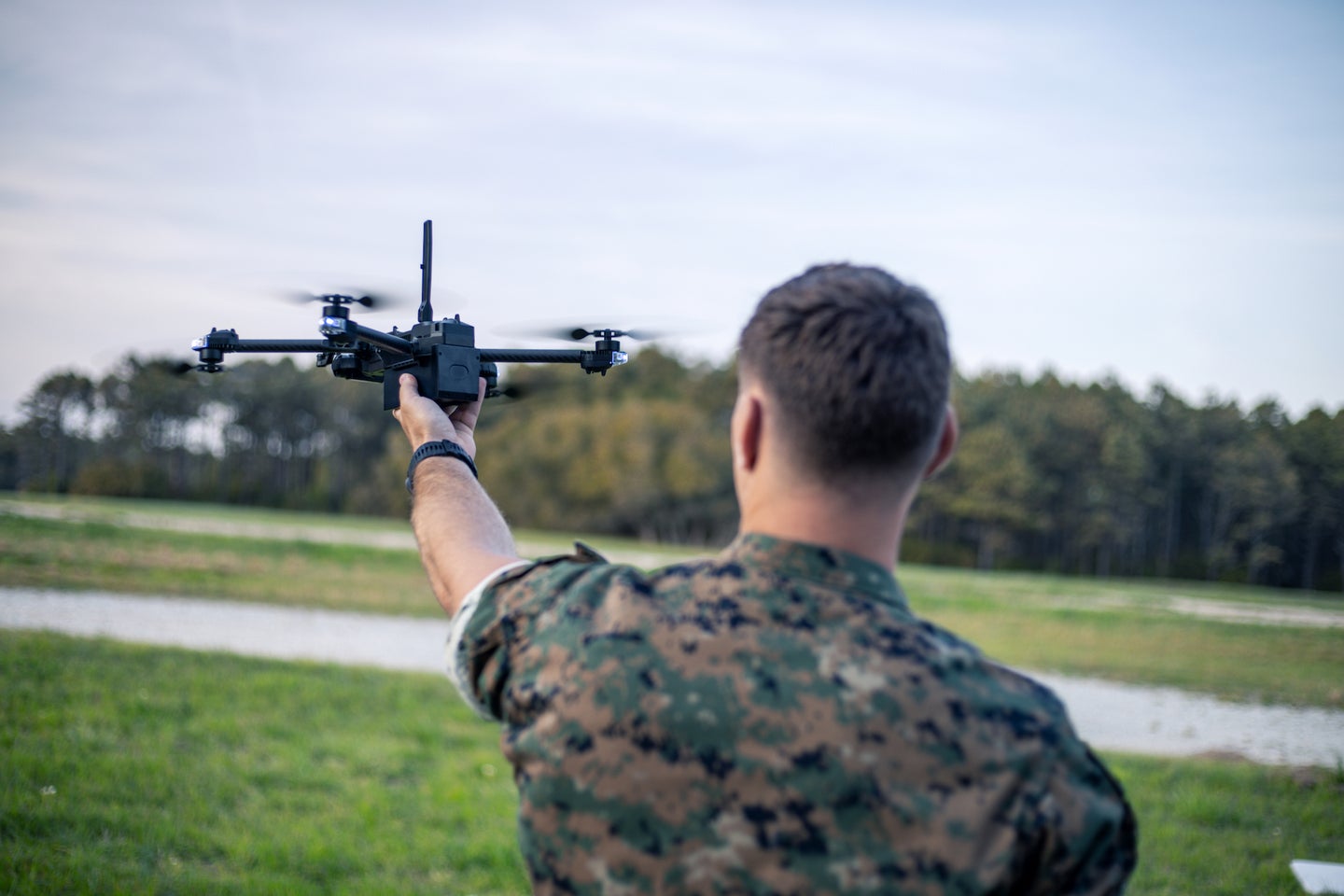 A SkyDio X2 drone in use in the United States in April. US Marine Corps / Akeel Austin
SHARE

The United Kingdom wants a new drone for its military, one small enough that soldiers can bring it into battle and abundant enough that it can be easily replaced. When it comes to finding this goldilocks flying bot, the UK is hoping to buy off-the-shelf and modify as needed. The Ministry of Defence is awarding a contract worth £3 million (roughly $3.8 million) to drone-maker Skydio for the delivery of X2D drones plus artificial intelligence and sensor systems. The award, announced May 18 by Skydio and partner company Marlborough Communications Limited, is part of a broader program to bring new tools into the British military, all while building off innovation that already exists in the market.

Through its Future Capabilities Group, part of the Ministry of Defence’s Defence Equipment and Support office, the United Kingdom is looking to find and field “nano Unmanned Aerial Vehicles,” or nUAS. The Skydio X2D is small: It weighs about 3 pounds, and when folded up is about a foot long by 5.5 inches wide. But the UK fields even smaller drones, like the sparrow-sized Black Hornet.

“The latest nUAS will offer a great deal more capability than seen previously in the nUAS weight class,” the office declared in its March 2021 magazine, “expanding on the reconnaissance and surveillance build of previously employed systems to also encompass night surveillance, weaponised, obscuration/distraction payloads and communications rebroadcasting.”

Small drones offer a unique promise and potential for militaries. By fitting into the backpacks or pockets of soldiers, a little UAV allows a squad to gain an overhead view of the surrounding terrain and even perhaps the positions of enemies. This capability can be provided by cheap, commercial drones bought off the shelf, but with those drones comes the risk that unencrypted communication between drone and pilot could give away the squad. Using a dedicated drone, built on commercial parts but with specific changes made to military security requirements, is one way to match the usefulness without bringing in additional risk. That’s a kind of approach the Ministry of Defence is trying with Skydio’s drones.

This logic was at the heart of the United States’ “BlueUAS” program, to create a commercial-style and similarly priced drone acceptable to the Pentagon. Skydio is one of the companies producing BlueUAS gadgets for the military, and the UK’s Ministry of Defence is piggybacking on that drone model to meet its own needs.

Skydio boasts that, as a baseline feature, its drones have sensors and programming to automatically avoid obstacles in any direction, and to operate at night. In addition, a special autonomy program “enables the drones to deliver total situational awareness with six 4K cameras building a map of the surroundings, and deep learning algorithms and AI able to understand and predict future scenarios to inform decision-making,” Marlborough Communications Limited and Skydio said in the release.

The Ministry’s use of Skydio drones included 90 of them that they purchased and tested in 2020, with nearly that many adopted the next year. It is, as the Defence Equipment and Support office describes it, part of a “Buy-And-Try-At-Scale procurement model, which puts technologically advanced equipment in the hands of troops far quicker than would traditionally expected.”

While much of the announcement focused on cost, at the heart of the drone and software is a promise that better and faster processing of data on the battlefield will make soldiers more effective in combat. The push towards greater integration of robotics is paired with a push for greater use of data, as part of an integrated plan for fighting war in the 21st century using the tools of that century.

“A mix of crewed, uncrewed and autonomous systems look set to make a step change in lethality and utility,” reads the Integrating Operating Concept, an August 2021 outline of how the Ministry is planning for future wars. “The pervasive nature of data – private, commercial, governmental and military combined – gathered from constellations of sensors and crunched at speed by artificial intelligence, will make it extremely hard to hide today’s military signature anywhere on the globe.”

Skydio drones are hardly the only models acquired and tested in accordance with this concept. In March, the UK’s Future Capabilities Group acquired Torch-X drones from Elbit and the self-contained swarm-pods of AtlastNEST. These robots will help the Ministry explore drone swarming and integration of new robots to existing vehicles and formations.

These purchases fall under a general pattern of exploring the robotizing of the armed forces, with ground robots and space systems tested alongside flying machines. While it’s easy to treat each system as a siloed-off development, with success independent from the rest of the robots, the ability to share data and work together could mean a vast array of useful drones is more than just the sum of its robots. Using flying drones like a Skydio to map out a compound before sending in ground robots that navigate based on the scouted map, could preserve not just the lives of the human soldiers following behind, but could ensure that legged robots can safely navigate brand terrain.