These dorky-looking glasses could help sailors sleep better on submarines

Disruption of circadian rhythms can come at a high cost for the Navy. 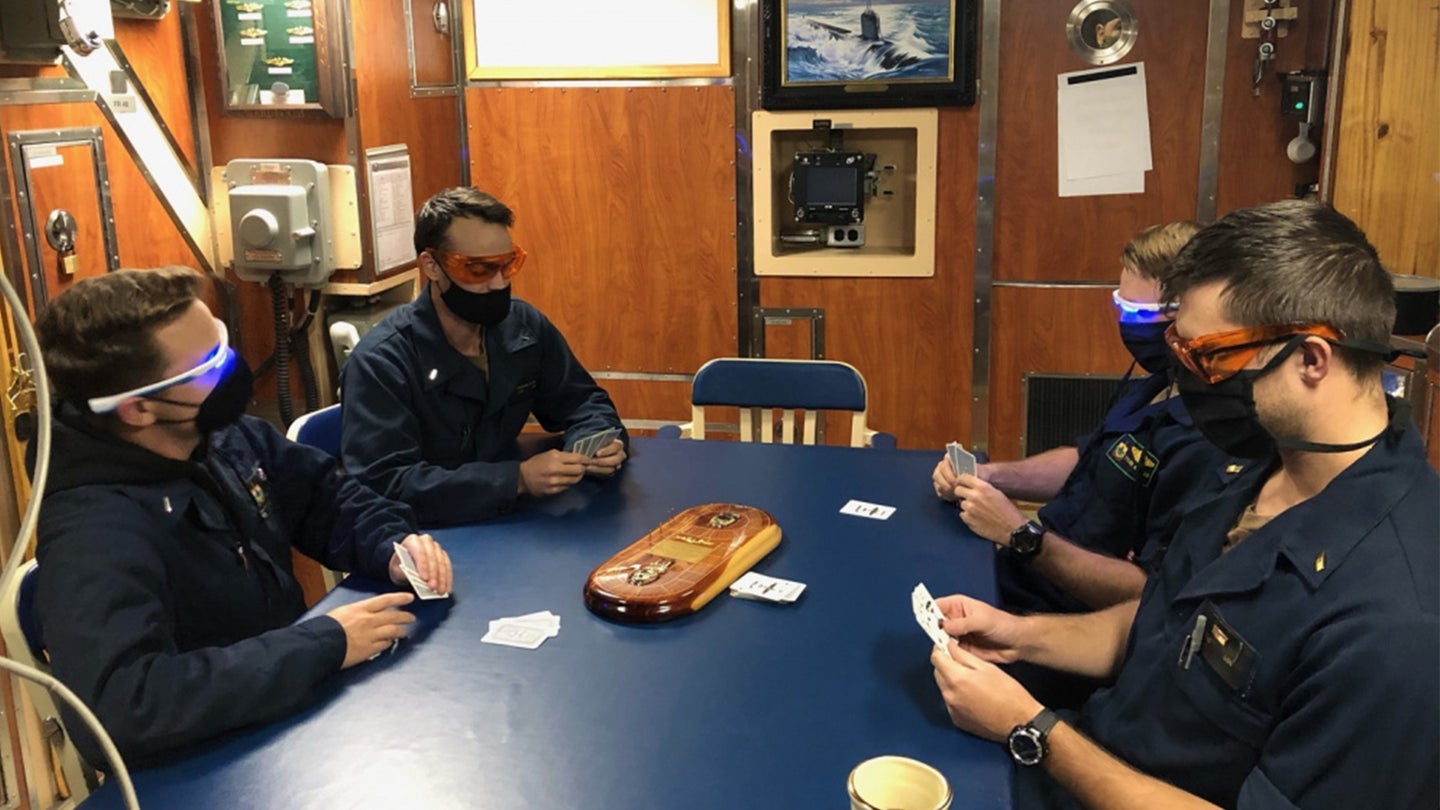 Participants in the “Using Personal Light Treatment Devices to Enhance Performance of Submariners” study aboard the USS Vermont, wearing their assigned PLTDs. Officers in the blue light glasses (left, and third from left) are at the beginning of their shifts and officers in the orange (blue light blocking) glasses (second from left, right) are at the end of their shifts and are preparing to go to sleep. LCDR Joseph DeCicco, MD, MC, USN
SHARE

It’s great to hear that somebody’s actually getting a good night’s sleep, but who knew it would be aboard an active-duty nuclear submarine? That seems to have been the case for 42 lucky sailors aboard the USS Vermont, who last November took part in a study where they wore special glasses, called personal light treatment devices, to try to get their sleep schedule in a better rhythm.

Despite the glasses’ resemblance to the much maligned “birth control glasses” issued to service members for decades, the study was a success, and many sailors wanted to keep wearing their glasses after it was over. While researchers still need to analyze the data, it could be a promising development for sleepy sailors across the Navy.

“These PLTDs are inexpensive, unobtrusive, and if they prove to be an effective countermeasure to circadian misalignment among submariners during underway periods, the US Navy will have one more option to help sailors get the rest and sleep they need to maintain their performance, enhance their moods, and potentially even improve their health,” said Dr. Sarah Chabal, a research psychologist with the Naval Submarine Medical Research Laboratory and the lead researcher on the study, in a recent press release.

The sailors must have been really sleep deprived, because the glasses look straight out of a high school chemistry class. Still, they address an unseen problem in the Silent Service: It can be hard to get some shut-eye when you’re stuck in a metal tube without a view of the sun or the night sky. Those external environmental cues help the body maintain a circadian rhythm, that internal clock telling us we should be awake during the day and asleep at night. Submarine crews take shifts to keep the boat running 24 hours a day, which means there are always lights on throughout the vessel.

To make matters worse, sailors, like many of us, spend some time on their phones or computers relaxing in their bunks before going to sleep. The problem is that those devices emit blue light, which suppresses the release of nocturnal melatonin, an enzyme that helps humans fall asleep. That means sailors may take longer to fall asleep and have more difficulty staying asleep, the press release explained.

Loss of sleep and circadian misalignment can result in decreased performance, impulsiveness, and even health consequences, which can lead to dangerous and costly errors aboard a $2.7 billion submarine like Vermont. What to do about it? Wear some not-so-cool glasses, apparently.

Chabal said that the goal of her study was “to investigate whether the judicious scheduling of light exposure through the use of personal light treatment devices, or PLTDs, can help sailors transition into and maintain their desired watch time.” Two types of glasses were used in the study: One provided blue light exposure to be worn in the morning immediately after waking, while the other blocked blue light and was worn at night before sleep. Meanwhile, a control group wore no glasses.

Lt. Cmdr. Joseph DeCicco, an undersea medical officer with NSMRL and Head of the Submarine Medicine and Survival Systems Department, went aboard Vermont in November with dozens of pairs of PLTD glasses as the crew prepared for a deployment to Brazil. All participants took sleep and mood surveys and wore sleep trackers on their wrists. DeCicco also collected biochemical circadian rhythm markers via saliva samples and measured the sailors’ cognitive performance with tablet-based games.

“The sailors were fascinated by the study,” DeCicco noted. “They thought that using personal light treatment devices to tailor their sleep schedules to their personal needs is much better than forcing the entire crew to one sleep schedule or another. Additionally, the crew members overwhelmingly reported increased ‘awakeness’ during their appropriate awake period while wearing the glasses.”

The study only lasted through Vermont’s trip to Brazil, but DeCicco pointed out that the sailors wanted to keep wearing the glasses on the journey back, past the end of the study. The press release did not say whether they were allowed to keep the glasses, but perhaps the Navy and other services will take note of the study’s success considering submariners are not the only service members stuck in perpetual fluorescent twilight: Many sailors serving on massive aircraft carriers are usually stuck below decks most of the time, young Air Force missileers pull 24-hour shifts 60 to 80 feet below ground, and plenty of special operations members adopt a nocturnal sleep schedule while deployed.

Could these military-grade BlueBlockers help them, too? Hopefully, and if these glasses go the way of “birth control glasses,” then somehow stylish hipsters will make them look cool in a few decades anyway.