Microsoft just introduced Windows 11 to the world. Here's what to know about the free new OS. 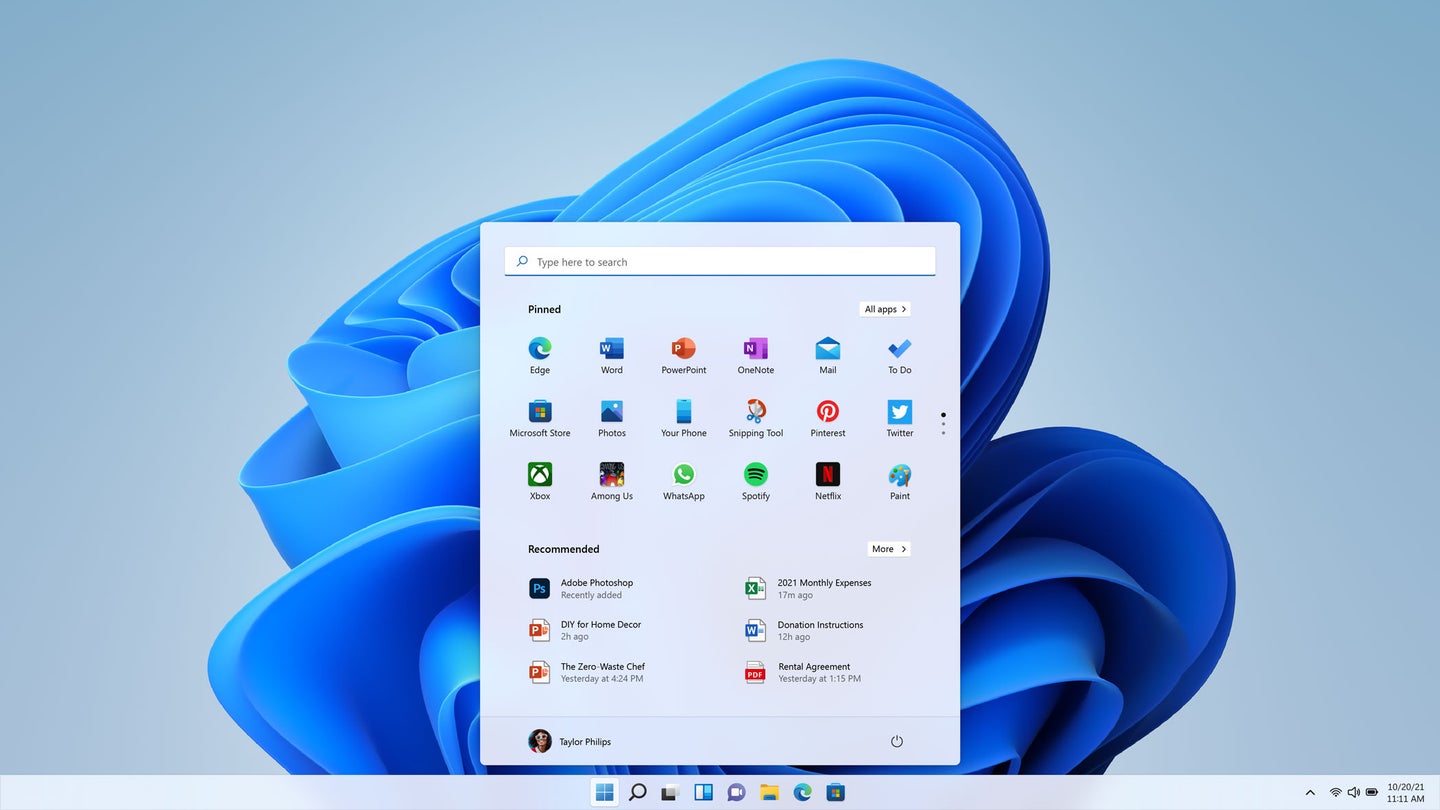 The revamped start menu has a Mac vibe about it. Microsoft
SHARE

Updating to a new version of Windows used to be a much different process. Back in the ‘90s, when fat, beige monitors roamed freely across the lands, people would line up at electronics stores to pay money for a physical copy of the latest Windows version. Here in 2021, we just got our first look at Windows 11, and you won’t need to camp outside the nearest Circuit City (RIP) to get a copy. You won’t have to pay for it, either.

Microsoft announced Windows 11 today with a live-streamed event that outlined the top-level features you’ll find in the update. It includes a visual overhaul, as well as a heap of new productivity, accessibility, and entertainment-oriented features. Here’s an overview of what you can expect when it starts hitting compatible PCs as a free upgrade toward the end of 2021.

Plus, when it arrives, Microsoft says that software updates will be roughly 40 percent smaller than in previous versions. If that means less time spent staring at a screen that says “preparing Windows update,” while I’m supposed to be getting work done, then I’m all for it.

Windows 11 gets a visual overhaul

From a visual standpoint, Windows 11 represents a substantial change compared to the aging Windows 10 interface. The Start menu has stuck around, but it has migrated away from the edge of the screen and into the middle. It has a decidedly more Mac-like appearance and pulls in recently opened files from a variety of platforms. On first impression, it seems less cluttered and more attractive than the current solution.

[Related: Google Chrome’s Reading list will help you finally close some of those tabs]

The OS now allows users to create individual desktops associated with specific tasks. So, you can create a workspace that’s visually unique from the desktop you associate with gaming to give the experience a different feel.

What to know about widgets

You’ll notice a new panel on the side of the Windows 11 interface. The Widgets area is built on the Edge browser tech and uses AI to pull in relevant content you might want to consume. You can also customize what shows up in there in case you always want the weather or other specific information. Again, this should feel very familiar if you’re coming from the MacOS.

Better options for navigation without a keyboard

If you use a Windows device with a touchscreen, like Microsoft’s own Surface computers, navigation will get simpler in Windows 11. Microsoft has added gesture control and increased the size of the areas you touch and drag to resize windows. What’s more, pen input now supports haptic feedback, so the stylus can give you tactile responses as you draw, write, and navigate around the OS. Users can also now customize the on-screen keyboards to more closely match what’s available on mobile devices.

The Xbox integration will get much tighter in Windows 11 than it was in Windows 10. The company’s Game Pass subscription service is now a fundamental part of the OS. More than 1,000 games will also now get the auto HDR functionality that Xbox Series X players already enjoy. That means gamers with compatible displays will get better color and overall picture quality from their games without having to do any manual tweaking.

The new Direct Storage function also comes from the Xbox camp and allows games to move assets directly to the GPU without having to involve the CPU. Even if you don’t understand the mechanics of the process, it will simply translate into quicker loading environments in games with sweeping landscapes. Less lag is always a good thing.

Lastly on the gaming front, Windows 11 natively supports Microsoft’s X Cloud tech, which allows players to run Xbox games in the cloud and play them on their PC. Combined, these elements do a lot to further Microsoft’s vision of a unified gaming world of Xbox and PC players.

Android apps are coming to Windows 11

Borrowing the iconic “one more thing” move Steve Jobs made so famous during Apple announcement events, Microsoft’s chief product officer, Panos Panay, dropped perhaps the biggest bit of Windows news at the end of the presentation. Android apps will run on Windows 11 and users will be able to find and download them directly through the Microsoft store.

That means mobile-only apps will be easy to install on PCs, so you can binge on TikToks while sitting at your keyboard instead of staring at your phone. Details are still somewhat limited when it comes to specifics, but we do know that the program is a partnership with Amazon, which relies on Intel’s Bridge technology. The announcement specifically mentions Tik Tok, so that app seems like a sure thing for inclusion, but we’ll have to wait and see what else becomes available and how the apps actually work.

When can you get Windows 11?

According to Microsoft, the Windows 11 rollout will start during the holiday season in 2021. It will be free, at least to start, but it will continue into the new year. It’s not out of the question that it could cost money after a grace period.

If you’re wondering whether or not your computer will run the new OS, Microsoft has already published the Windows 11 system requirements over on its page so you can start getting prepared now.