The journey to Eagle wasn't easy, and it's only a pitstop on the way to IBM's 1,000-qubit vision. 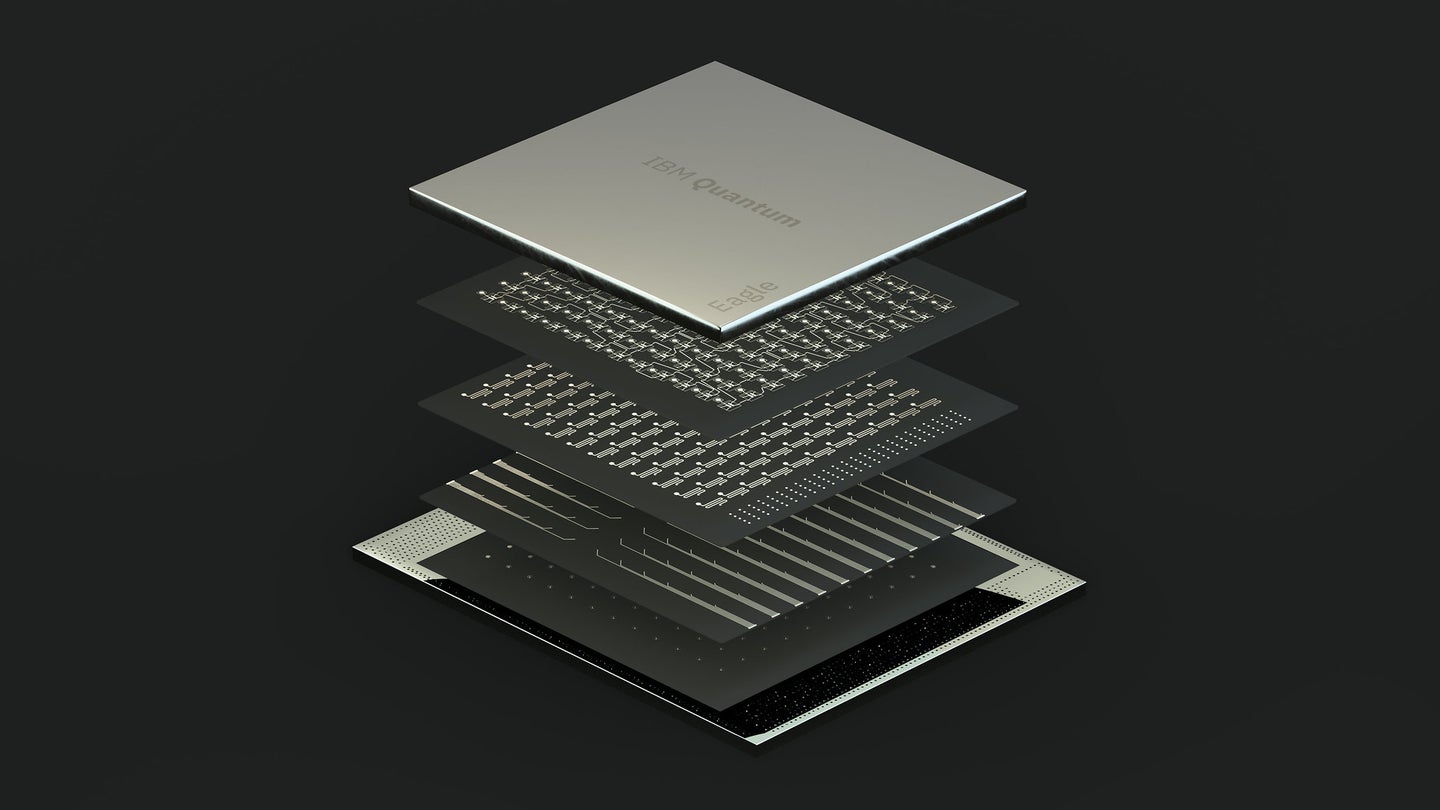 IBM unveiled a 127-qubit quantum computing chip called Eagle this week, showing off a new asset in the race to build the most powerful quantum computer.

Their chips will be matching up against those from the likes of Hefei National Laboratory for Physical Sciences at the University of Science and Technology in China, Google, and Microsoft.

The Eagle is a quantum processor that is around the size of a quarter. Unlike regular computer chips, which encode information as 0 or 1 bits, quantum computers can represent information in something called qubits, which can have a value of 0, 1, or both at the same time due to a unique property called superposition. By holding over 100 qubits in a single chip, IBM says that Eagle could increase the “memory space required to execute algorithms,” which would in theory help quantum computers take on more complex problems.

“People have been excited about the prospects of quantum computers for many decades because we have understood that there are algorithms or procedures you can run on these machines that you can’t run on conventional or classical computers,” says David Gosset, an associate professor at the University of Waterloo’s Institute for Quantum Computing who works on research with IBM, “which can accelerate the solution of certain, specific problems.”

Here’s what to know about these new chips, and quantum computing in general.

These are the ways quantum computers could be helpful

All of this fancy tech begs the question: what good is a quantum chip, anyway?

There are three large categories of tasks that scientists theorize quantum computers could do better than traditional machines. When physicists Richard Feynman and David Deutsch first proposed quantum computers in the 1980s, their idea was to use them to simulate quantum systems like molecules that cannot be accurately depicted through classical algorithms and conventional computers.

Quantum computers are also adept at certain mathematical functions such as factoring integers, a use case first proposed by mathematician Peter Shor in the 1990s. Certain cryptography systems that encrypted data over the internet relied on the difficulty of this problem. “It’s true that quantum computers can be used to break some of the encryption that is currently used on our classical machines,” says Gosset. “However, there’s an entire field known as post-quantum cryptography, and that field aims to develop new classical crypto systems that are resistant to being broken.”

Lastly, quantum computers could conduct faster searches through an unsorted database compared to classical computers, thanks to an algorithm first introduced by computer scientist Lov Grover.

In more modern times, some of IBM’s clients use quantum computers to simulate molecules or the dynamics in chemistry problems, while others have tried to apply them to machine learning and optimization tasks.

The journey that led to the Eagle chip started in 2016, when IBM released a 5-qubit quantum computer on the cloud called the Quantum Experience. Since then, the company has released a succession of chips with increasing numbers of qubits—all named after birds, and each with their own set of technological challenges.

IBM’s quantum computing hardware is comprised of superconducting circuits. The qubits themselves are made of a superconducting material called niobium. The layout of the system looks like an inductor in parallel with a capacitor. These two elements control the flow of current in the circuit, and the inductor is a non-linear element called the Josephson Junction, which is an aluminum oxide nanoscale junction. This type of superconducting qubit was pioneered at Yale in the aughts, and in practice, it looks like an artificial atom that can be controlled by a sequence of microwave pulses.

The flight of the Falcon and Hummingbird

Basically, all quantum chips are linked up to a control system that has electronics which are used to operate the quantum processor. They can feed pulses through the wires to the qubits. “You talk to them by shining microwaves or putting a signal with a particular frequency. Each qubit is labeled by its own frequency, which would be like the color of light. It’s like each qubit has its own serial number,” explains Christopher Wilson, a professor at the University of Waterloo’s Institute for Quantum Computing.

With the 27-qubit Falcon chip, IBM engineers had to work out how to accurately tune the Josephson junctions that they made. “When you make them, your fabrication of them will result in some spread in the total energy of where these qubits end up,” says Jerry Chow, director of quantum hardware system development at IBM Quantum. To make a large number of qubits that each had the right energies, they came up with a laser annealing technique that allowed them to adjust the qubit frequencies to the right places after fabricating the chip.

The chip just before Eagle was Hummingbird at 65 qubits. The hurdle there was with how the individual qubits were readout.

“With all these qubits, you need to bring in wires to control them, bring out wires to read them out, and your full system is put inside a [cryostat to] cool it down, refrigerate it,” says Chow. “We designed the chip in such a way that allowed us to, for every 8 qubits, use one single readout chain. That influences the total volume of components that we keep inside of the refrigeration system.”

Eagle, their current chip, needed an efficient wiring scheme. “When you get to the 100 [qubit] level, it’s just very hard to bring in the wires to actually address each one of them. It’s just a real-estate problem,” says Chow. In past versions, the chips were “bump bonded,” which meant having one chip with qubits and another chip with some of the wiring. “Even in that case, it’s very hard to bring all the wiring to the right places as you scale up.”

But contained within the Eagle chip is a set of layers that allow multi-level wiring. “We’re able to embed a lot more of the control circuitry that allows us to fan in and fan out the signals to address the numbers of qubits that we have in Eagle,” Chow says. In an interactive animation on their blog post, IBM broke down these layers from top to bottom into the qubit plane, the resonator plane (for qubit readout), the wiring plane (routes signals to qubit plane), and the interposer (delivers signals). This design was inspired by microprocessors common in semiconductor technologies (think classical computer chips).

Another feature of the Eagle chip is the hexagon lattice structure that holds the qubits. “The idea is that you have these circuit elements, which are the qubits, and what we need to do is connect the qubits together,” Chow explains. The qubits are placed in a honeycomb-like arrangement—picture a qubit on every vertice and edge. A circuit element called the quantum bus is used to link up neighboring qubits. The lattice design dates back to the Falcon chip. It allowed them to have a high-density array of qubits on one graph, because it reduced the amount of energy collisions between the qubits, which could reduce error rates and preserve the qubits’ coherence time.

Coherence time refers to how long the qubits stay in the wave-like, quantum superposition state. But as the qubits talk to each other and to the wires in their environment, quantum information leaks out, resulting in decoherence. The coherence time and the time it takes to do a quantum gate “sets the time limit on how big a calculation you can do,” Wilson says.

“We’ve tested all the qubits, checked to see that all the gates are working. We’re still continuing to fine tune all these gates and make them higher fidelity, lower errors. We’ve run simple demonstrations of entanglement,” says Chow. “As we continue to fully characterize it, we’re going to be doing tests like quantum volume to measure quality, CLOPS [Circuit Layer Operations per second] to measure speed.”

An updated cooling system for the upcoming Osprey

IBM is eyeing even bigger chips down the road: one called Osprey would fly at 400 qubits, and another, Condor, at 1,000. But for such high-density connections, Chow’s team thinks that the current single-chandelier system might not be enough to keep the entire system cool.

The System One container that houses their current chandelier cryostat as well as the wiring and the control electronics surrounding the quantum computer are due for an upgrade. “A big thing there is we need more space for the cryogenic environment, so it’s a larger fridge,” says Chow. “We’ve been partnering with Bluefors to imagine what that type of larger and more usable fridge space is going to look like.”

The number is important, but it’s not everything

Many experts agree that breaking the 100-qubit barrier is noteworthy, as most quantum computers in the past few years have hovered in the 50 to 70 qubit range (Google’s computer that achieved “quantum supremacy” in 2019 had 53 qubits).

For context, the cost of representing a quantum state in a classical computer’s memory scales exponentially with each added qubit.

However, experts say that determining whether the quantum computer is actually useful is not just about the number of qubits. “It’s about the connectivity of the device, so your ability to apply gates between different qubits,” Gosset adds. “It also has to do with the fidelity of the qubits, in other words, the rate of errors that occur in the device.”

More than one way to make a quantum computer

Although superconducting qubits are the most popular materials used to construct a quantum computer, it’s certainly not the only way. “IBM and Google work on superconducting qubits and Microsoft on a more nascent approach called topological qubits,” says Sebastian Will, an assistant professor of physics at Columbia University. “Both technologies partially rely on manufacturing techniques and approaches that are somewhat similar to the silicon chips that we know from classical computers.”

Honeywell, for example, is developing trapped-ion quantum computers, using electromagnetic fields to hold the ions, and microwave signals and lasers to encode them. But by and large, they’re more frequently seen in university labs and small startups.