Looking back on the year’s most talked-about robots

New robots promised to help humans with research, around the home, at work, and even in public service. 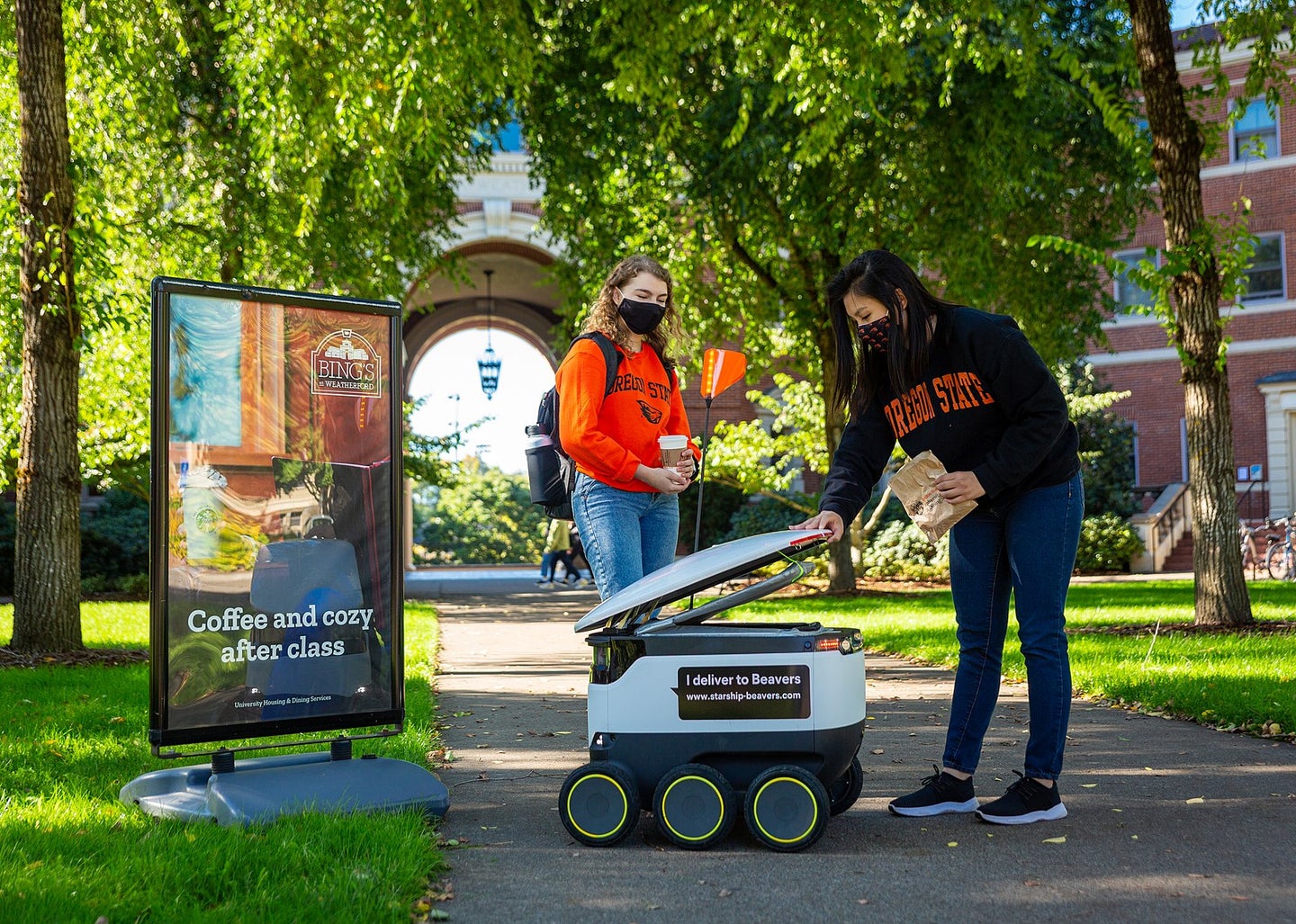 Starship delivery robots descended on college campuses across the US in 2021. Oregon State University
SHARE

Every year, a flurry of weird and wonderful robots come into existence, destined for social media stardom or mundane labor.

Some of 2021’s most buzzed-about robots aren’t really new. Rather, they’re updated models with design touch-ups, part swap outs, or reimagined applications. This long tinkering process is how the field of robotics ultimately gets better.

But not every robot received a warm welcome this year. Tesla was slammed by experts when it announced its concept machine in August because it seemed to undermine how long it takes to develop a useful, good robot. The public was also heavily skeptical about a few of the other debuts due to their potential to cause harm. However, those failures, combined with real-world performance and reception, are how engineers figure out the best ways to have these types of technology assist humans at home, at work, in hospitals, in scientific research, and more.

As 2021 wraps up, let’s look back at some of the coolest (and not so cool) robots that came on the scene.

Besides taking on tasks that are repetitive, labor-intensive, or difficult for humans to perform, some robots help explore unknown worlds and terrains from the deep ocean to outer space. This year, several aquatic robots were developed to be sent on underwater missions in the vast blue sea. Woods Hole Oceanographic Institution’s Orpheus, for one, will venture into the darkest depths of Earth’s seas (and maybe one day, other planets’ oceans) to gather information and samples to help researchers better understand life at the extremes.

Closer to the surface, an array of free-floating biogeochemical Argo floats demonstrated that they can successfully measure the amount of oxygen produced by algae and plankton. These marine plants are the base of the ocean food web, so being able to gauge how they’re changing could paint a portrait of ecological health and help inform the operation of fisheries. There are thousands of Argo floats drifting all across the world.

Meanwhile, an AI-powered newcomer has yet to pass tank trials before it can hit the open ocean. CARL-bot, short for Caltech Autonomous Reinforcement Learning Robot, will learn to navigate the mighty ocean on its own, drawing on algorithms and experiential memory. The final version of CARL could carry a suite of scientific instruments for measuring pH, salinity, temperature, and more. The same software that the robot uses could also one day power bionic jellyfish, which can float through the water, untethered from depth limitations.

Engineers don’t always need to reinvent the wheel, especially when they can just learn from and mimic nature’s best designs. Plenty of new robots this year took their inspiration from animals. The avian world was a popular muse Stanford University engineers unveiled a bird-legged quadcopter that can stick the landing on rough and textured surfaces like tree branches. Its robot limbs are complete with claws, toe pads, curving feet, and bendable joints.

Another Caltech robot named LEO was modeled after the bird-y ability to switch between hopping and flying when maneuvering through tricky landscapes. Like the quadcopter, it has jointed legs, and substitutes propellers for its wings. LEO uses its propellers to keep itself upright and adjusts the position and orientation of its legs so it can balance on a slackline.

Fish robots made a splash this year, too. A group from The University of Virginia came out with a tuna robot that moves its tail like the real deal. The researchers think that this tail design may one day be used to propel the underwater vehicles of the future. The tuna robot has only ever swam solo, but a bass robot created by engineers at NYU Tandon was put into an experimental arena with other live fish. This model was used to test out the fear responses of wild-caught invasive mosquitofish. And although it might look wonky to us, it scared the mosquitofish so much that they changed their aggressive behaviors, lost weight, and became less fertile.

Away from Earth, ants have inspired a team of engineers from the Delft University of Technology in the Netherlands to propose swarms of autonomous, cooperative robots that could dig out underground colonies for future human settlement on Mars. Like ants, these robots would communicate with their neighbors and divide up tasks.

Now, more than ever, consumers are aware of the fact that corporations, social media platforms, and websites may collect and share their personal data. With those privacy concerns comes a cautiousness about letting robots operate autonomously in homes. For example, people weren’t too keen on Amazon’s friendly bot assistant, Astro, which Gizmodo called a “little narc butler.” Astro would function like an embodied Alexa with the added ability to memorize a house’s floor plan and the faces of family members.

As far as home robots go, simpler machines seem to sit better with consumers. But they can’t be too dumb. The latest Roomba finally solved the problem of avoiding piles of doo-doo while cleaning up, much to the relief of pet owners everywhere who fear an unwanted “pooptastrophe.”

Finally, robots are helping take on a growing range of professional tasks. This year saw a firefighting tank robot, a flying mail delivery robot, and aerial robots that have assisted doctors in delivering health supplies or measuring vitals from the air. In June, another flying robot proved effective at detecting and locating human screams, an eerie capability that was originally meant for “search and rescue” missions during disasters. And in September, Singapore police tried out small-time crime surveillance robots that made some residents wary.

In fact, North American companies wanted more robots this year compared to 2020. Due to the pandemic labor shortage, they bought 29,000 robots valued at $1.48 billion, according to a report by industry group the Association for Advancing Automation. The food service industry was one sector that pivoted heavily to technology when social distancing policies rolled out. Robot servers, boba makers, and fry cooks have stepped in to help around short-staffed kitchens. Delivery robots on college campuses ferried groceries and takeout to customers’ doorsteps.

During the pandemic, a certain class of social robots also came to play an important role. As a part of a loneliness-intervention campaign, many states’ senior services departments started shipping out robot pets to older residents who had to isolate from COVID alone. These battery-powered machines can purr and bark, move their tails, or roll over. They’re quite simple for social robots, but at a relatively low price point, they did what they were supposed to: provide companionship for their humans.