How To Make A Beach Clean Itself 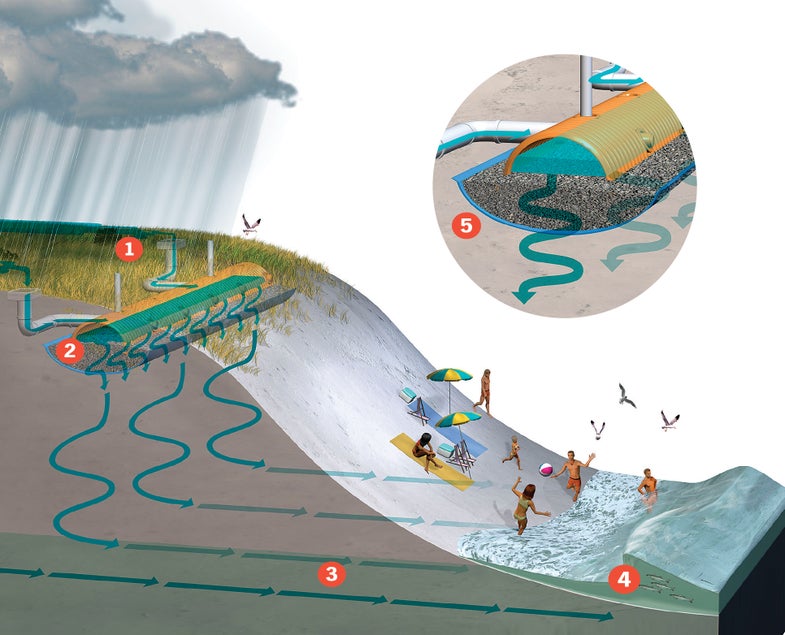 In 2011, water pollution closed or drove visitors away from U.S. shores on more than 15,000 beach days across the country. In many places, the problem is getting worse. As coastal towns crowd with rooftops and parking lots, they produce more runoff from rain. The runoff picks up bacteria from animal waste and collects in pipes that then release the water into the ocean. Pretty gross. But some engineers have a simple and effective solution: Send runoff underneath the beach instead, where sand can filter the bacteria out.

The research team, led by Michael Burchell at North Carolina State University, has already built three sand-filtration systems under the dunes of a beach about two hours from Raleigh and is considering sites for additional installations.

1. Dirty storm runoff is diverted into a five-foot-wide open-bottom plastic tube positioned 1.5 to 2.5 feet beneath the sand.

2. The water flows into a bed of gravel, spreading out onto a larger surface area of sand, which acts as a filter.

3. The runoff that reaches the groundwater is diluted, and whatever bacteria get trapped in the sand die.

4. By the time the storm runoff is 75 feet down shore, bacteria levels are comparable to normal groundwater’s.

5. The materials to purify dirty storm water are quite simple: plastic tubing, gravel, and a little help from Mother Nature.