Starbucks seems to have embraced the fact that very few people actually go to coffee shops to sit and drink... 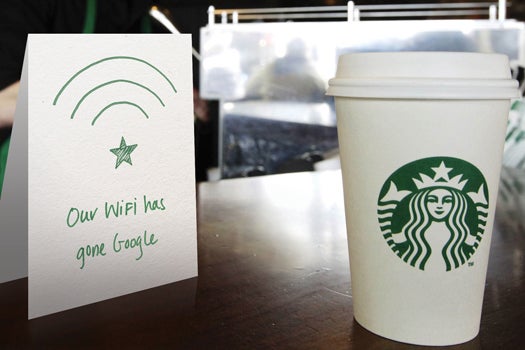 Starbucks seems to have embraced the fact that very few people actually go to coffee shops to sit and drink coffee nowadays. For cafes, solid Wi-Fi connection is about as necessary as fresh brew. So the company has teamed up with Google to make free Wi-Fi faster in all 7,000 of Starbucks’s U.S. stores. (If only the company would adopt its role as the urban traveler’s public bathroom with such enthusiasm).

Google reports that its connection will make Starbucks Wi-Fi 10 times faster than before. For those lucky enough to live in a Google Fiber city, it’ll be 100 times faster–watch out for whiplash there, guys. The “Google Starbucks” network should show up at a Starbucks near you starting in August, with the full rollout happening over the next 18 months, according to Endgadget. Goodbye, spotty AT&T access!