Smart design tweaks make the Pegasus the most user-friendly and stage-ready acoustic-electric guitar on the market. 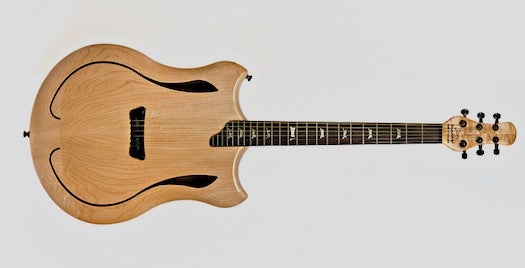 It’s not often that a truly original guitar design comes around. Guitarists are notoriously conservative, and for good reason: The traditional acoustic guitar is a beautiful instrument, a time-honored classic of design. But while the acoustic guitar is great for playing solo in intimate settings, it often can’t compete in the midst of a band or the sounds of people talking in a big club.

That’s where the acoustic-electric guitar comes in—typically just an acoustic guitar with an electric pickup mounted on. It’s a Frankenstein-style merging of disparate parts. It works…but it’s not exactly elegant.

Enter the Pegasus, from Jon Kammerer Guitars: an acoustic-electric guitar that’s specifically designed to be played plugged in.

What does that mean, exactly? How does it work?

To understand what makes the Pegasus unique, you first have to understand how a traditional acoustic guitar works. The strings vibrate when they’re played, and transfer that vibration to the front and back plates of the instrument (the parallel panels of wood on the body, under the strings and resting against the player). That vibration gets pushed out of the front of the guitar, through the sound hole. The vibration of the strings mixes with the vibration of the wood and the air being pushed out of the sound hole to give us that rich acoustic guitar sound that we all know and love.

That’s great for playing unplugged, but once a traditional acoustic is plugged in, the vibration of the top plate, together with the air being pushed out of the sound hole, interfere with the sound waves from the speakers, causing feedback, that horrible screeching sound. The design of the Pegasus eliminates the traditional sound hole in favor of two curved slits that run along either side of the body. Besides making the Pegasus look cool and vaguely alien, these reduce feedback from the vibration of the top plate and the air coming out of the body. They also make the Pegasus extraordinarily light, since without the sound hole and the vibration chamber, the guitar can be much smaller.

What’s good about the Pegasus?

As mentioned above, replacing the sound hole with slits reduces feedback, which means you can play the Pegasus louder with less distortion, and get a wider range of tones than you would out of a traditional acoustic. That, combined with its light weight, make the Pegasus a lot of fun to play. The action—the distance between the strings and the fretboard—is also lower on the Pegasus than on most other acoustic guitars, so it’s easier to fret (hold down) notes.

There are a few other design tweaks that make the Pegasus more user-friendly and stage-ready than other acoustic-electric guitars. Instead of the usual bridge pins that hold the strings in place on the body, the strings in the Pegasus attach directly underneath the bridge, so there are less parts to damage or lose. The battery box for the pickup is easily accessed through a small panel on the underside of the guitar, which makes it much easier to change the battery when it dies. And the truss rod, which adjusts the tension of the neck, is more accessible than on other acoustic guitars.

What’s not so good about the Pegasus?

As an acoustic-electric, the Pegasus sounds mighty fine, but as a straight acoustic, not so much. The very qualities that make it light and cut down on some of the feedback also severely dampen the sound. Plug it in, and you get the same richness you expect out of an acoustic guitar. Unplug it, and the Pegasus sounds rather tinny. So if you’re looking for a good unplugged sound, you’re better off with a traditional acoustic.

Secondly, while the design reduces feedback from one source, there’s still feedback from other sources, particularly if the active (battery-powered) pickup gets too close to other electronics— e.g., amps, microphones, etc. That’s no different from any other guitar, but it bears mentioning.

Should I buy a Pegasus?

At $2,000 and up, the Pegasus isn’t cheap, but it is less expensive than a lot of other premium guitars on the market. For guitarists who want to try something new, expand their sound, or save their audiences from screeching, the Pegasus is a solid choice.