A Monocle That Summons Airstrikes With The Push Of A Button

Ignore the inevitable Google Glass comparisons, this is all Call of Duty. 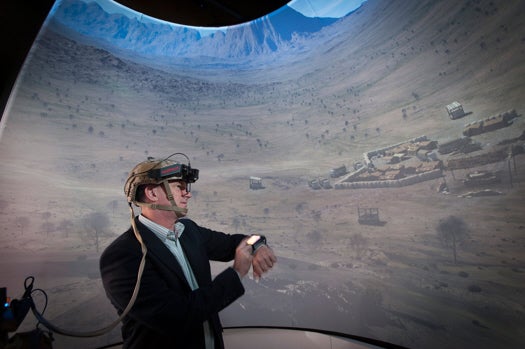 A new helmet design by Raytheon, exhibited at the Paris Air Show this week, wants to summon firepower from the sky with just a glance and a button press. The Advanced Warfighter Awareness for Real-time Engagement (AWARE) system is a monocle-sized display that could significantly improve coordination between air and ground forces.

The problem it solves is simple: Sometimes troops on the ground need to call in support from above, but are stuck in basically the stone age, writing down coordinates on paper and reading them out loud. Instead, a networked system like AWARE automatically identifies the coordinates of whatever target the soldier is looking at, and then a press of a button passes that information along clearly and cleanly.

An automatic mapping system with button-press command saves seconds and reduces error on the battlefield. With such a system in place, aircraft flying overhead working with troops on the ground can find out, in real time, what support is actually needed, and where it’s needed.

As sensors and precision weaponry have expanded over the past decade of war, one of the biggest challenges remains getting the right people to record the right targets and relay that to the right support. This head-mounted system would help fix that. (Videogames like Call of Duty already have versions of this in place, where teammates in airplanes can see targets pinpointed by their comrades on the ground, and soldiers on the ground can use special displays to mark targets for the flyers above.)