Let This Robot Teach You How To Be Less Awkward

MIT builds a virtual person to help people practice talking to other people, which already sounds like an awkward situation. 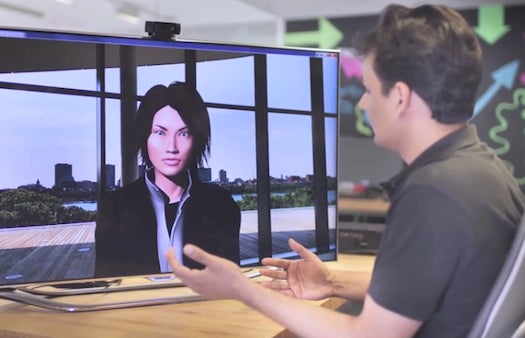 If you think you’re awkward in social situations, and would like the solution to that problem to be as awkward possible, try this: have a robot coach you on how to interact with human beings.

The software/robocoach is called MACH (My Automated Conversation coacH). Besides a digital face, the MIT-developed MACH has speech- and face-recognition tools, allowing it to pick up on behavior, then advise people on how to correct awkward behavior. A camera, for example, logs how much a person smiles and maintains eye contact, while a microphone picks up on how clearly the person speaks or says “umm.” After monitoring the person for a while, MACH gives feedback. (Being watched like that sounds very awkwardness-inducing.)

For a test run, the inventors took MIT students and had them do a fake job interview. The researchers then broke the students up into three groups: one got no training from MACH, but watched videos with advice on job interviews; one met with MACH, but didn’t get any feedback; and one got the full feedback from MACH. A week later, all three groups went in for another simulated interview, and the students who got help from MACH, the researchers reported, did better, as rated by the people they interviewed with. The other groups didn’t appear to change much.

MACH is designed to run on an ordinary laptop, so anyone who needs it will eventually be able to use it. But it might be a while before the program is released generally, so just keep talking in front of the mirror to prep for that big date.