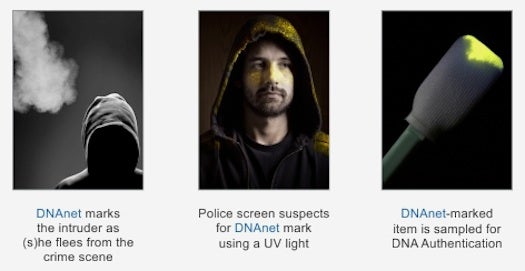 You know DNA makes proteins. It tells living things how to tick. It carries blue eyes and an early receding hairline from father to son (Sorry, son!). But beyond what it does biologically, it’s also just a carrier for information—a barcode, but one that can barely be seen even under advanced microscopes.

Now, a few different companies are making devices that use DNA in that way, as an invisible bar code to tag people. The devices allow banks and police officers to spray or splat suspects with millions of copies of a colorless DNA tag at the scene of the crime. For example, Applied DNA Sciences of Stony Brook, New York, advertises a system that is able to spray a room with DNA-laden fog in case someone comes in, demanding money. Later, investigators may identify the criminal from those DNA bits, Discovery News reported.

The DNA tags are made with entirely artificial sequences, so that every tagging device may have a different sequence. The genetic material is difficult to wash off completely and lasts about two weeks, Discovery News reported.

Check out Discovery for some of the specific devices companies have made, from that fog machine to a kind of DNA paint gun.