"The Chime" is loaded with sensors for picking up ambient noise, then transforming that noise into music. 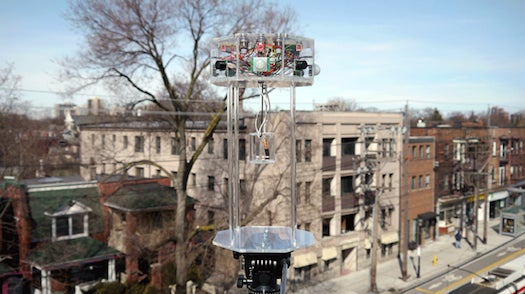 “The Chime” is a wind-chime-shaped mass of sensors that pick up on the environment: if the sensors detecting something approaching, the device tinkles with xylophone notes; if something is moving away, it swells with the sound of strings; and the music all shifts key based on the temperature. The result is a changing, ambient soundtrack for a city. De Pape explains the project like this:

Inspired by Georg Simmel’s notion of the Blasé (an indifference towards the difference between things), I set out to explore the relationship between sensing technology and the routines of everyday life. I feel the city is all too commonly represented by abstract systems and maps, a tendency driven by a reductionist pursuit of efficiency, and one which ignores the idiosyncrasies occurring on street level. This is the noise in the system, the richness that ultimately renders cities generative landscapes. I thus set out to bring attention to the noise by building a musical instrument inspired by wind chimes: The Chime is a collection of 18 sensors measuring 27 parameters assembled to poetically translate the impulses and flows of the everyday city into sound.

You can check more videos of the project over at De Pape‘s site. It’s much nicer to hear than people talking on their phones.