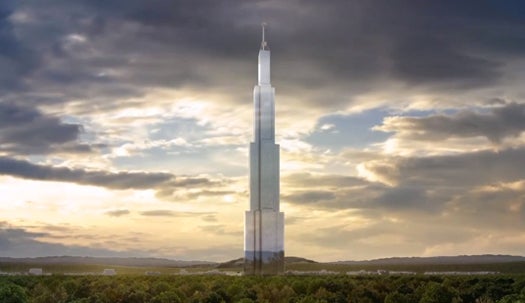 We’ve been following Chinese construction firm Broad Sustainable Building’s ambitious plan to build the world’s tallest skyscraper the city of Changsha for a while now, and it looks like they’re making progress: the Chinese government has given the go-ahead for BSB to build Sky City, a 220-story, 2,750-foot skyscraper, the largest in the world. Even crazier, the Chinese firm is trying to build it in just three months.

The current record-holder, the Burj Khalifa in Dubai, was constructed in five years, and even that took some impressive engineering. BSB wants to make Sky City possible by spending four months prefabricating the materials off-site, then erecting it all over the course of three months, starting this month. (The original plan was to start construction in December, but the project has apparently tied up in red tape for months.)

When complete, the building will be almost a city: 30,000 people will be able to take 104 elevators or a single six-mile ramp that curls through the interior toward a school, hospital, and housing. The projected pricetag for it all is $628 million. Not cheap, but considerably less than, say, the $1.5 billion Burj Khalifa.

Hopefully the project really does get completed in three months, so we can see the awesome building timelapse video that’s almost certainly going to come out of it.