A team of scientists have used a custom-made 3-D printer to create high-power microbatteries. 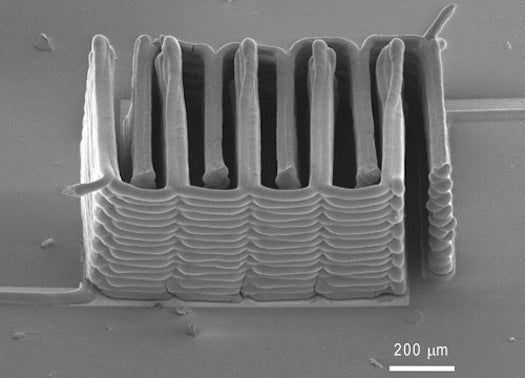 Scientists at Harvard University and the University of Illinois at Urbana-Champaign have 3-D printed lithium-ion batteries as small as a grain of sand. The batteries could be used to power micro-electronics, such as medical implants and robots that mimic insects.

To construct the batteries, the team—led by Harvard’s Jennifer A. Lewis—had to develop specialized inks with the correct electrochemical properties that would immediately harden upon release. After a few tries, the team managed to construct anode ink with nanoparticles of a lithium metal oxide compound and cathode ink from nanoparticles of another lithium metal oxide compound.

The researchers also had to custom-build a 3-D printer that could secrete the inks through an extremely narrow nozzle. Layer by layer, the inks solidified into interlaced, ultrathin stacks of electrodes less than the width of a human hair. With the skeleton of the battery formed, scientists then packaged the electrodes with a surrounding case of electrolyte solution.

After measuring the final product, the team discovered the microbatteries were comparable in performance to commercial batteries in terms of charge and discharge rate, cycle life and energy density.

The technology could go a long way toward helping to miniaturize electronics. “Jennifer’s innovative microbattery ink designs dramatically expand the practical uses of 3D printing, and simultaneously open up entirely new possibilities for miniaturization of all types of devices, both medical and non-medical,” Donald Ingber, Wyss founding director and professor of bioengineering at Harvard SEAS said in a statement.

The project’s results are available online in the journal of Advanced Materials.