It can also pick up batteries and basketballs, use a key to open a door, and operate a drill! 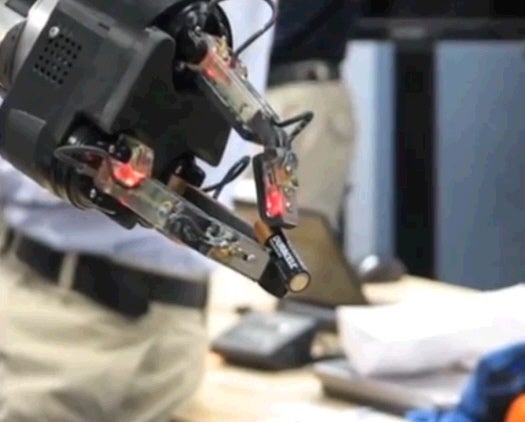 Robots, while awesome, tend to be clumsy in unpredictable human environments. Machines that use hands as deftly as humans do, with only minimal direction, would be a tremendous boon to rescue and hazardous work. They’d also be a major step toward useful, multipurpose household robots.

Whereas prosthetic hands are designed to restore lost ability while still mimicking the appearance of a human hand, the hands that DARPA’s Autonomous Robotic Manipulation (ARM) program is developing are all about giving robots the power to use human tools and manipulate objects in a way that people generally take for granted.

Without the constraint of resembling a human hand, these robotic variants are free to focus on the function. iRobot’s version opts for only three fingers and so looks more like a bird’s talon than human phalanges. Watch the eerily silent video below (I recommend playing Daft Punk’s “Harder, Better, Faster, Stronger” in the background) to see iRobot’s ARM-H pick up a basketball, use tweezers, turn a key in a lock, operate a drill, and more: