Ultra-Sensitive Stethoscope Can Pick Up Heartbeats In Space

It works over the din of a space ship, even if it's not placed correctly on the patient's body. 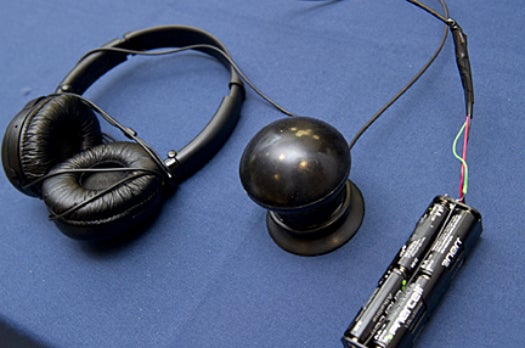 In space, no one can hear your heart scream. Though the vacuous final frontier is soundless, the interior of a spacecraft is replete with the white noise of computers, electronic instruments and fans. All that buzzing and whirring and clicking makes it difficult to listen to the relatively faint sounds of an astronaut’s heartbeat or breathing.

In order to make sure we can diagnose our beloved space wanderers easily in the cacophonous ISS, a group of undergraduate engineers at John Hopkins designed a stethoscope that can filter out the background noise to hone in on the sounds inside the body.

It even works pretty well if it isn’t placed in exactly the right place. “Considering that during long space missions, there is a pretty good chance an actual doctor won’t be on board, we thought it was important that the stethoscope did its job well, even when an amateur was the one using it,” explained Noah Dennis, one of the inventors, in a press statement.

The seemingly idiot-proof stethoscope works through what is described simply as “electronic and mechanical strategies,” and also comes with a suction cup to keep it in place on a patient’s chest and rechargeable batteries. James West, the Hopkins professor who oversaw the student project, hopes it can also be used in locations closer to home where medical care isn’t super advanced, to help medics identify the sounds associated with common diseases in infants.