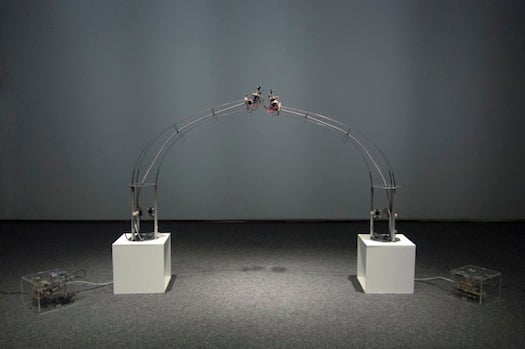 Meet Vincent and Emily. They’re a robotic couple created by artists Nikolas Schmid-Pfähler and Carolin Liebl as an examination of human relationships. The two machines are programmed to react to sound and movement, moving their robotic heads or making a whirring noise in response to their surroundings, or to each other.

As humans are only able to communicate their thoughts and emotions verbally and through their actions, likewise the two robots depend for their communication on their sounds via loudspeakers and motions controlled by their motors. The two technical creatures capture sounds and movements via sensors and react on those signals with own expressions. Just like in each human relationship it comes to misunderstandings: If Vincent sends positive signals by up and down movements, it is possible that Emily interprets even those signals as negative. Disagreement is preprogrammed.

It’s a “tense relationship,” Schmid-Pfähler writes, and people who see it “will be searching for similarities to particular patterns of human behavior.” It’s true: these two do look a tiny bit human while they’re buzzing around. You can almost imagine one saying: “Honey you forgot to do the dishes again–whirrrrrr.”