After two years of searching, the icy observatory has finally found evidence of the high-energy particles, which may have come from a distant black hole or supernova. 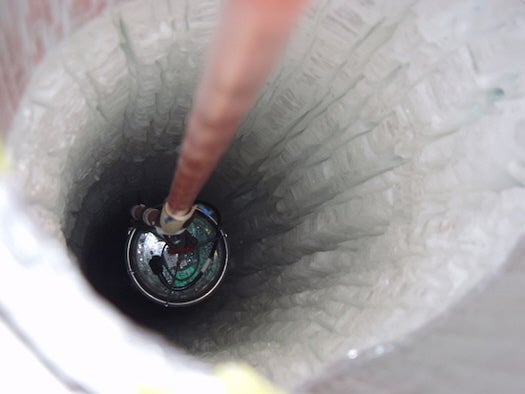 It looks like the IceCube Observatory neutrino detector at the South Pole has found what it was looking for just two years after opening.

Neutrinos are strange subatomic particles that travel through the galaxy in straight lines, harmlessly passing through regular matter, and with their neutral charge they are free of the influence of magnetic fields. As such, neutrinos convey a lot more information than their diminutive stature suggests, leading astronomers back to their origins in high-energy cosmic events, like gamma-ray bursts, supernovas, black holes, or star formation. (There are other, less-interesting neutrinos produced by nuclear reactions, within the sun, or sometimes in manmade accelerators, but those carry less energy and are easy to distinguish from the high-energy, deep-space neutrinos.)

The IceCube Observatory is all about finding these extraterrestrial neutrinos. To do that, it takes advantage of one of the few things neutrinos collide with: ice. Antarctica has that in abundance; the next trick is catching those collisions. The observatory consists of over 5,000 optical sensors arrayed in strings throughout holes drilled into the ice, sometimes as far as a kilometer deep. These sensors can catch and record the flashes of light produced when a neutrino collides with ice. With the sensors in place, scientists sat back and waited for results in trickle in.

At an astrophysics symposium on Wednesday, University of Wisconsin–Madison postdoctoral fellow Nathan Whitehorn described 28 high-energy neutrino events observed by the Antarctic laboratory. Two of these events revealed neutrinos traveling faster than any ever observed in a manmade accelerator. A forthcoming publication is set to describe the events in more detail. For now, we just know the observatory is functioning, and scientists are ready to work with the data it generates.