Nanoparticle antennae are woven right into the organic tissue of the ear! 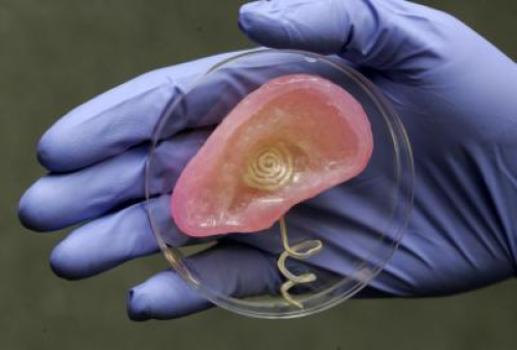 A team of scientists at Princeton University–along with one very savvy high school student–have managed to create a truly bionic ear. It’s not just a replacement–it has sensors woven throughout the tissue that actually enhance its hearing abilities.

In recent months, it’s been proven possible to run living cells through a 3-D printer and keep them viable, which has some pretty amazing possibilities for bionics. This team at Princeton took it a step further by being the first to actually weave sensors, in the form of silver nanoparticles, into the printing process. This isn’t an ear with an antenna on it; it’s a seamlessly integrated bionic ear.

This particular ear was made with a mix of hydrogel and calf stem cells combined with the silver nanoparticles, which act as an antenna. The stem cells will later develop into cartilage, the researchers say. It’s not ready to be stuck onto a patient’s head quite yet; at the moment, the ear can only pick up radio waves, though the researchers say the next step is to include pressure and acoustic sensors, just like an organic ear.

The big change here is that this bionic ear looks and feels like a natural ear. It’s very difficult to combine electronics, which are “hard and dry,” according to a co-author on the study, with natural body parts, which are largely made of water. 3-D printing is one way to combine the two seamlessly. It’s a major step forward for bionics–and, interestingly, it couldn’t have happened without the help of Ziwen Jiang, a local high school student, who helped with the CAD modeling of the ear.