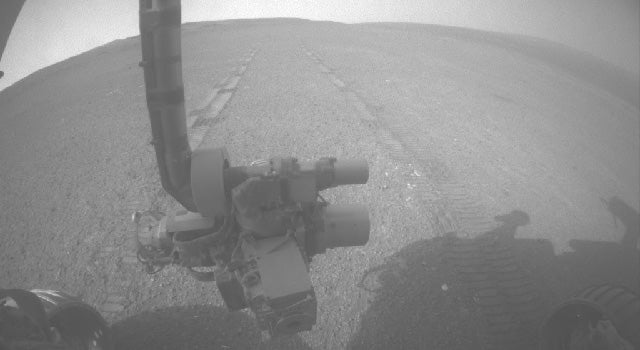 Curiosity may be everyone’s favorite Mars robot these days, but it has a long way to rove if it’s going to catch up to the Mars rover Opportunity. Last week, Opportunity traversed 263 feet of Martian frontier near Endeavour Crater, bringing its total trip odometer up to 22.22 miles–the longest distance ever traveled by a NASA vehicle on the surface of a planet not named Earth.

Opportunity isn’t surpassing another robotic rover. During Apollo 17, Eugene Cernan and Harrision Schmitt drove the Lunar Roving Vehicle 22.21 miles over the lunar surface. That was in 1972–so suffice it to say, it’s taken NASA a while to cover the same amount of ground on Mars as we did during the Apollo missions, albeit under much different and more challenging circumstances.

But with this milestone Opportunity still isn’t the most traveled surface vehicle in the non-Earth solar system. That distinction belongs to the Soviet Union’s Lunokhod 2 robotic rover, which covered 23 miles of lunar surface in 1973. But that record is poised to fall to Opportunity in the coming weeks as well. This week the rover embarked on a multi-week journey from the area where it has been working for a couple of years now toward a target known as “Solander Point” about 1.4 miles away. Expect Opportunity to hit another space exploration distance milestone any day now.