Continuing the quest to keep humans and explosions far, far away from each other 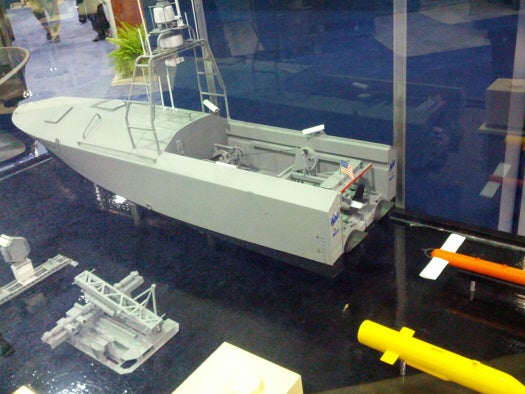 The U.S. Navy has long used MH-53 Sea Dragon helicopters to find and detonate underwater mines, but those helicopters were first tested in the 1970s and are set to retire in 2017. Now, new reports suggest the Navy will pass the task on to small, unmanned boats.

The robots are officially categorized as “Unmanned Surface Vehicles,” USV, and they would tow mine detection sonar and magnetic sensors behind them. Their small size and shallow draft allow the boats to pass over most underwater mines without triggering them. The towed sensors locate mines so that other ships can either avoid or neutralize the threat without exploding.

How did the military deal with mines before it had robots? In late World War II, volunteer “Guinea Pig Squadrons” in large ships deliberately sailed over pressure mines, setting them off to free up routes for post-war maritime traffic. To protect themselves from the explosions, the crew members wore helmets and lined the ships with padding and mattresses.

It was a novel solution, but unmanned boats and sophisticated sensors are definitely the better way to go.