What The X-47B Reveals About The Future Of Autonomous Flight 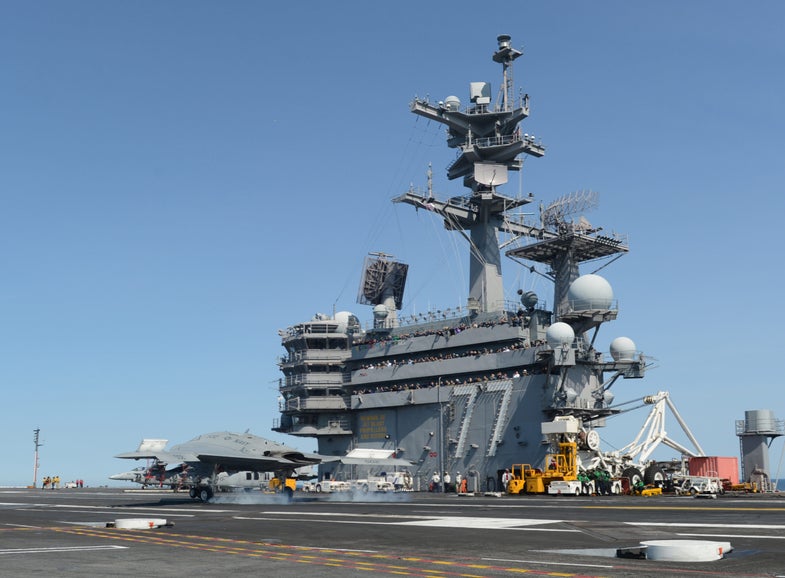 When the Navy’s X-47B drone screamed skyward off the aircraft carrier USS George H.W. Bush in May, those of us standing on the flight deck knew we were witnessing history: a robot flying itself–no pilot in the cockpit or on the ground, guiding the aircraft with a joystick. It was the first time an autonomous war plane had completed a catapult launch from a carrier deck.

Then it will retire. After some aerial refueling trials that are scheduled for some time next year–those trials won’t be conducted by the X-47B air vehicles but by Learjets running the X-47B’s flight software, a result of sequestration cuts to the Navy’s budget–the entire X-47B program will wind down, its place in aviation history secure.

But the aircraft itself is only part of the story. The X-47B and the Navy’s Unmanned Combat Aerial System (UCAS) program that developed it have engineered a major technological shift, one that will impact both manned and unmanned flight. Over the course of this summer the X-47B, along with the Northrop Grumman contractors who developed it and the U.S. Navy personnel working on the UCAS program, will do things that will change aviation forever. The X-47B isn’t just an aircraft, it’s a whole new paradigm for naval aviation. Here’s what you need to know about the warplane that is transforming flight as we know it:

The X-47B Is Autonomous, Not Intelligent

One major misconception about the X-47B is that it is autonomous and therefore is a simple malfunction away from being Skynet. This is not the case.

Here’s what the X-47B doesn’t do: think.Here’s what the X-47B does: It takes off and lands by itself with input from computers and sensors aboard the carrier as well as input from humans on the carrier. Everything it does in between takeoff and landing is executed by the aircraft’s onboard flight computer. But it’s not controlled by the onboard computer. Where Predator and Reaper drones are remotely piloted by humans with hands on a control stick, the X-47B is operated by humans using keyboard commands and mouse clicks. The operator tells it to go to a certain point on the map, and the X-47B pilots itself there. The onboard computer handles the actual piloting–the banking of the airplane to set a path from point A to point B, for instance–but the human operator is ultimately in control of where it goes and what it does.

Here’s what the X-47B doesn’t do: think. It doesn’t generate its own orders or deviate from what it’s been instructed to do unless human operators change those orders. There are some cases where the aircraft does make a determination on a course of action according to preprogrammed instructions–during landing, for instance, if the flight computer detects some kind of problem with the aircraft’s glide path to the carrier deck it has the option to abort its own approach and landing (an officer on deck can also “wave off” an X-47B that is on landing approach). But even in this scenario, the X-47B goes directly into a preprogrammed flight pattern that will bring it back around for another try at landing.

That is, the aircraft never makes a decision itself that operators haven’t preprogrammed it to make, so the humans always know exactly what it is doing and always maintain the power to change what it is doing. There are lingering and legitimate concerns about these kinds of combat vehicles being hacked or digitally hijacked, and while the Navy acknowledges that this is something that will have to be worked out in the future, cyber security is not one of the technologies the X-47B program is demonstrating. But the point remains: not only is the X-47B’s autonomy not the same as artificial intelligence, it’s not even close. Human operators are always atop the chain of command.

The X-47B Is Not Destined For Active Service

The X-47B has two weapons bays (but no weapons),which has proved troubling to some, especially when coupled with the aforementioned misconceptions about autonomy. The word “combat” is right there in the program title, after all. So isn’t the X-47B basically one of the so-called “killer robots” that some groups have been warning about?

The answer is “no,” or at least “not yet.” The X-47B is a technology demonstrator and is not destined for active service. There are two X-47Bs in existence today, and they are the only two that will ever exist. When they complete their carrier trials later this summer, they are both likely destined for museums, Navy officials say. The weapons bays have never carried anything but ballast or additional sensor equipment for acquiring flight data.

So why give them weapons bays if they’re never going to be used? As a technology demonstrator, the X-47B was designed to mimic the flight characteristics of an armed, unmanned combat jet. And the Navy does indeed plan to create an unmanned, carrier-capable combat jet. It will be developed through a program called UCLASS, or the Unmanned Carrier Launched Airborne Surveillance and Strike system (not to be confused with UCAS, which is the X-47B technology demonstration program). The ordering of the words in that title are no mistake; the Navy wants a stealthy, long-range jet that can launch from carriers primarily for use as an intelligence-gathering and surveillance tool. But the Navy also wants something that can penetrate enemy air defenses and deliver precise strikes (say, on a nuclear facility or a missile launch site) in situations in which sending manned strike aircraft might result in pilot casualties. It’s the X-47B’s job to prove out the technologies that will lead to such an aircraft (the Navy hopes to have that future UCLASS aircraft operational by 2020). The X-47B is designed to be as much like a future combat aircraft as possible, right down to the inclusion of weapons bays in its design. But under the Navy’s current plans it will never use them.

This Is As Much About Humans As It Is About Machines

The real innovation driving the X-47B is the translation of human systems into a digital language. Via high-speed data links that constantly exchange information between ship and aircraft, the carrier and the X-47B swap relative positioning and precision GPS data 100 times per second. The carrier knows–day or night, fog or sunshine, rolling swells or placid waters–exactly where the aircraft is from moment to moment, and likewise the aircraft processes every single movement of the ship–every minute pitch and roll of the carrier deck–instantaneously.

Human Navy pilots rely on a system of lights and vocal commands from flight deck officers to line up their landing approaches. But with the carrier and aircraft basically speaking to each other at a rate far beyond the human brain’s capacity to comprehend and respond, the two are basically two parts of the same organism. As such, the margin of error for the precise point at which the X-47B touches down on the carrier deck is remarkably low (within a few meters in any direction).

So how is this about humans? If it were just the carrier and the aircraft out there repeatedly launching and recovering X-47Bs, the humans wouldn’t matter. But the aircraft carrier deck is extremely human-centric (not to mention a very dangerous place to work). For a century now flight deck operations have been choreographed through radio voice commands, hand signals between deck personnel and pilots, and other visual cues like signal lights. Robots understand none of these–they think in 0s and 1s. The real innovation driving the X-47B is the translation of this very human system into a digital language that the robot can understand. The Navy brass likes to call this “digitizing the carrier airspace” and it’s what allows them to seamlessly integrate a robot into an environment where other humans–both manned aircraft and deck crew–are going to be working.

This Is An iPod Moment For Naval Aviation

That’s the real takeaway from the UCAS program and the aviation milestones the X-47B is hitting right now. Now that the Navy has a working system–not just a technology or a group of disparate technologies, but a new platform that merges several complex technologies into a single, user-friendly system–it can build something truly game-changing around it.

That game-changing thing will probably be whatever aircraft comes out of the future UCLASS program, which will likely be tailless and stealthy just like the X-47B, have a longer effective range than the F/A-18s that the Navy currently has in its air wing, and could serve as an important strategic counterbalance to recent advances in the range of anti-ship ballistic missiles like China’s DF-21 “carrier killer” (if something like the X-47B can conduct surveillance and strikes at a greater operational radius than manned fighter/bombers, then carrier groups can stay out of range of land-based missiles and other anti-ship defenses).

The Navy also envisions a new common command and control system that could manage operations for the Navy’s unmanned Fire Scout helicopters and interface with the Navy’s new MQ-4C Triton Broad Area Maritime Surveillance (BAMS) drones, which are expected be the future of intelligence-gathering and reconnaissance on the high seas. In this vision, new manned aircraft will be outfitted with the same kind of high-speed data links that currently join the X-47B and the aircraft carrier, further simplifying human-piloted flight and networking all the Navy’s many aircraft, surface ships, and submarines together. Aircraft carrier operations–much of which have been stuck in the 20th century–will be pulled into the digital age. The advent of the X-47B and the systems that will follow in its contrails marks a paradigm shift in naval aviation that will unfold over the coming decade.

Perhaps the most important thing to know about the X-47B is that none of this is happening in a void. Congress has mandated that the FAA integrate unmanned aerial systems into the national airspace for civilian and commercial use by 2015, and some of the biggest technology questions the FAA faces on the civilian side–How do we operate manned aircraft and unmanned aircraft safely in the same airspace? How do we create a means for air traffic controllers to communicate seamlessly with both manned and unmanned systems? How do we learn to trust the robots?–are already being tackled by UCAS and the Navy. Technologies like the precision GPS and relative positioning that make it possible for a robot that cannot see or hear human commands to land on a moving aircraft carrier will eventually roll downhill to the civilian aviation sphere.

Some of this is already happening. The FAA’s NextGen National Airspace System, which will roll out between now and 2025, is essentially an attempt to turn America’s ground-based, largely analog air traffic control system into a satellite-based digital system. In other words, the FAA is trying to digitize the national airspace (sound familiar?) using tools like enhanced data links to share more and better information between controllers, pilots, and aircraft themselves.

All of which goes a long way toward saying that the X-47B might have a relatively short shelf life, but the system underpinning it is going to shape flight for many decades to come.