Curiosity Wakes Up To Drill This Bumpy Rock

The Mars rover will drill a new rock to double-check for signs the planet could once have been hospitable to life. 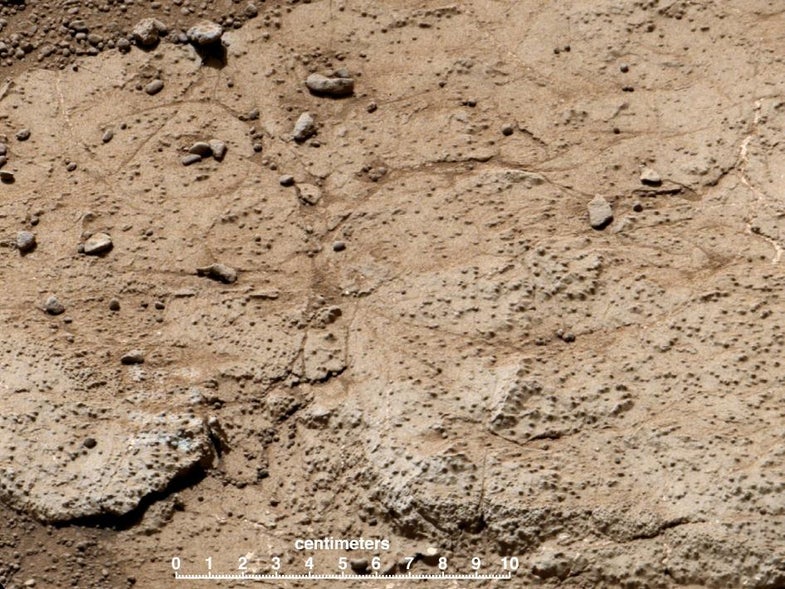 After a few weeks off because of the pesky sun, NASA’s Mars rover Curiosity is awake and back to work, and scientists are about to give it a new assignment. In the coming days, Curiosity will drill into the bedrock seen here, which has been nicknamed “Cumberland.”

Cumberland, with its cliffs and rocks, is a mighty fine place to drill a second rover sample—that’s because it’s an awful lot like the rover’s first sample, from a rock called “John Klein.”

When it drilled that rock, Curiosity found evidence of an ancient environment that could have been hospitable for Martian microbial life. Dust from the drilled rock was not red, but a powdery grayish bluish hue, which suggested the insides of Mars are not rusty (and sterile) like its exterior. But scientists want to double-check those results, and Cumberland will help them do so.

Cumberland is similar to John Klein, but it seems to have more bumps on its surface, which would have formed when the rock was soaking in water. Curiosity will drill into it in a few days.