What Could Possibly Go Wrong With This Child-Piloted Robot War Machine?

Answer: nothing. Just take the kids to the toy store and everything will be fine. 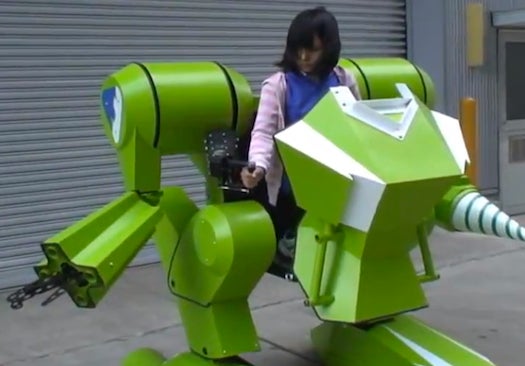 Sakakibara-Kikai is a Japanese robotics manufacturer that specializes in futuristic, semi-outlandish robotic exoskeletons. One of the company’s first exoskeletons, the Landwalker, looked amazing: like a team of ace engineers built a 12-year-old boy’s fantasy robot. Then Sakakibara-Kikai actually built one designed for kids. Now, apparently in a move to corner the child robot-exoskeleton market, the company’s unleashed the Kid’s Walker Cyclops, the world’s next kid-piloted war machine.

Well, okay, it’s probably just for amusement purposes. But look at that left arm! You will quickly be taking your child to the toy/candy store at drillpoint if you purchase one of these for them. And since the last version of the ‘bot ran about $20,000, you probably have lots of money the children will be able to extort from you after they have taken over in their robot-fueled uprising.