The Newest Defense Against Biological Warfare? This Cube

In 15 minutes, this device can identify biological threats in a sample of blood. 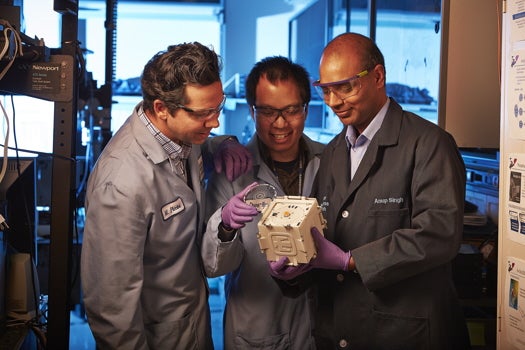 This cube could detect a biological threat in a sample of blood in less time than it takes to commute home.

Funded by a grant from the National Institute of Health, SpinDx (yes, that’s the name the researchers went with) is a liquid-testing lab in a cube. Using cheap disks to collect samples, usually blood but also other bodily fluids or even just water, the SpinDx disks “contain commercially available reagents and antibodies specific to each protein marker” embedded into 64 tiny pores. Using just a pinprick of blood (or tiny sample of whatever fluid is being tested), capillary action seeds the pores on the disk with the sample. The SpinDx cube then spins the disk in a centrifuge, and lets the reagents and antibodies in the pores test for up to 64 toxins, and delivers test results in just 15 minutes.

The faster a threat can be diagnosed, the better hospitals and the CDC will be able to treat patients. And with an effective early response, we are that much safer from zombies. Okay, zombie defense isn’t the first goal, but in light of recent stories about lost viruses and new bioweapon risks, the prospect of a quick diagnosis machine is good news.

The device is still in the testing stages, but so far results have been impressive. Saddam Hussein once produced botulism, a poison used in small doses as a beauty product, in bulk for nefarious purposes. The poison also sometimes occurs in poorly canned food, and there are about 145 poisoning cases reported in the United States each year. It’s also a difficult disease to test for–current standard practice requires a test on live mice. According to Sandia National Laboratories researcher Greg Sommer, the SpinDx test “vastly outperformed the mouse bioassay in head-to-head tests, and requires absolutely no animal testing.”

Which is great, but to take the SpinDx from lab testing to production, researchers will have to clear two hurdles–animal and clinical tests. After that, the scientists believe the SpinDx will be at the forefront of catching new diseases, keeping researchers busy for years to come. And, hopefully, keeping the rest of us safe.