A wireless data-gathering grenade to toss into danger. 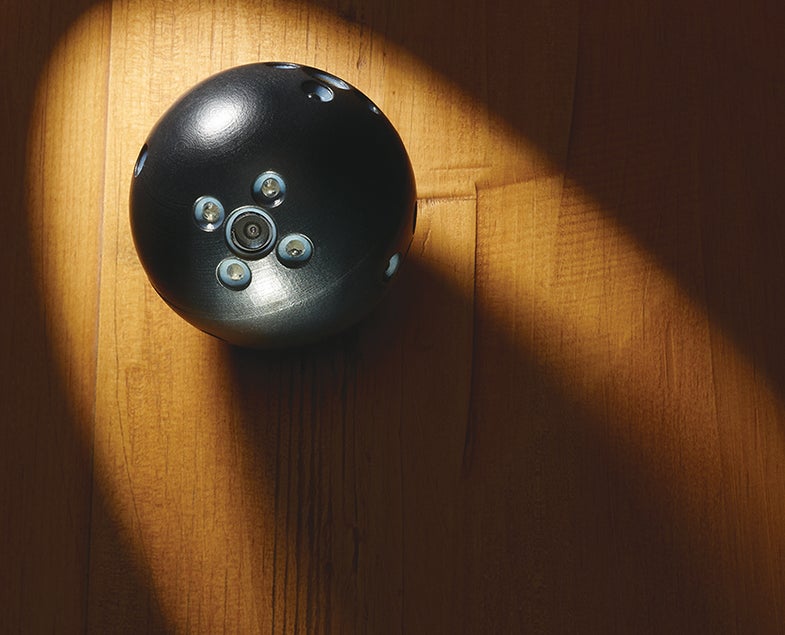 After an earthquake devastated Haiti in 2010, search-and-rescue teams descended upon Port-au-Prince to look for survivors. Francisco Aguilar, a graduate student in public policy at the time, was shocked to read stories about crews relying on complex, expensive imaging systems. “Only a few teams had them, and you had to be really well trained to use them,” Aguilar says. He soon launched a start-up in Cambridge, Massachusetts, to develop a simple way to explore hard-to-reach places: a throwable, expendable, baseball-size probe.

The Bounce Imaging Explorer has a shock-absorbing shell embedded with six cameras, plus clusters of near-infrared LEDs to light up dark rooms (for the cameras). To deploy the Explorer, an emergency worker links it to a smartphone or tablet and chucks the ball into danger. It immediately begins taking photos and testing for methane, carbon monoxide, and dangerously high temperatures. A microprocessor inside the ball then stiches the photos together and converts the raw data for transmission over Wi-Fi. Just seconds after the toss, a wrap-around panorama—complete with environmental warnings—appears on the synced device.

Aguilar quickly imagined applications beyond disaster areas, such as burning buildings, hostage crises, and combat zones, so he sought feedback from potential customers. His start-up cranked through dozens of prototypes in the first 18 months, tweaking the design as requests poured in. When several police officers said they wanted to be able to hear inside a room, for example, Aguilar added a digital microphone.

Police, firefighters, soldiers, and nuclear-plant inspectors have offered to test the device, which Aguilar is determined to keep between $500 and $1,000. “We want to get it as cheap as possible so it can be as broadly deployed as possible,” he says.