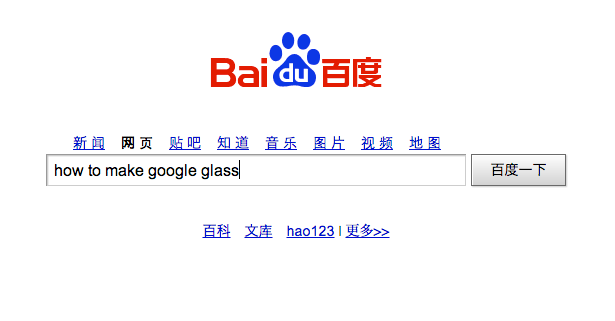 Baidu, the kind of bizarro Chinese Google, is rumored to be working on a take on Google’s latest creation, Google Glass. According to ChinaDaily, Baidu’s “Eye” project will include “an LCD display, voice-controlled image recognition and bone-sensing,” will respond to voice and gesture, and would sync with a smartphone to accomplish certain tasks, like making phone calls. It’s Glass, in other words.

Like Google, Baidu has a huge majority of the search market in its native country, from which it derives most of its income. Baidu also has a maps service, a news frontpage, local search, a social network, an online encyclopedia, a web browser (that looks pretty much exactly like Google Chrome), a cloud documents service, and a smartphone operating system (which is based on Google’s Android). All ripoffs of Google (or Facebook, or Wikipedia), but all okay. On the other hand, Baidu is also notorious for censoring anything the Chinese government wants, has been caught up in bribery scandals, and offers convenient ways to search for pirated music and videos. It’s Dark Google.

Baidu is said to be talking to Qualcomm, makers of some of the best mobile internals (processors, that kind of thing) on the market, and Foxconn, known for assembling Apple’s iPhones and iPads, for the creation of the Eye. Baidu has yet to comment, but we’re curious to see how the alterna-Glass develops.