The White House Responds: Yes, You Should Be Able To Unlock Your Own Smartphone

The White House "agrees" that consumers should be legally allowed to make full use of their phones--but it's still against the law. Where do we go from here? 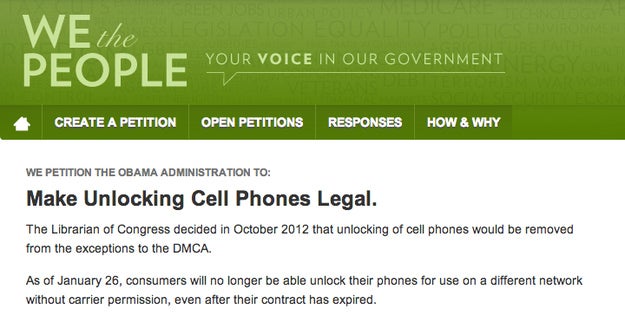 A petition created by Sina Khanifar to make unlocking phones legal has garnered over 114,000 signatures on the White House’s website–and the White House has finally responded. Before we get into that, here’s what’s going on.

In 1998, the Clinton Administration passed the Digital Millennium Copyright Act, or DMCA, which was an attempt to criminalize the circumventing of Digital Rights Management, or DRM. You see, in 1998, people still sometimes bought these curious shiny silver discs called CDs. But thanks to new sharing networks like Napster, people sometimes ripped the music off those CDs and shared them with strangers on the internet. To stop that, a few of the major record labels, led by Sony, implemented security measures that theoretically made it harder to rip those CDs. It did not make it very much harder, though, and pirates promptly began figuring out ways to get around this security.

As a weird result of this old (by internet terms) law, unlocking your phone also qualified as a violation. Cellular carriers like Verizon and AT&T usually “lock” their phones to their own networks, so you can’t just use a Verizon phone on Sprint (there are also technical reasons stopping this, including differences in network type leading to incompatibility, but usually, you are technically able to use a phone on at least one other network in some way). The carriers don’t want you to unlock your phone; they cut you a significant discount on phones so that you’ll sign a contract pledging to use only their service for years, and that service is where they make their money.

Of course, it is also pretty easy to “unlock” a phone. Any tech-inclined owner can do it themselves, or, at worst, pay a stranger to do it for $50 or so.

It’s not ethically or legally wrong for these carriers to lock their phones; that’s the deal you signed up for. But unlocking the phone qualified as a violation of the Digital Millennium Copyright Act, which is not what that law was written to do. So until earlier this year, there was an exception written into the law so users would not be breaking the law by unlocking it. Because it’s messed up to make that illegal! It’s your property, and as long as you should be allowed to do whatever you want with it.

In October 2012, the Librarian of Congress (who is in charge of appointing the poet laureate and also, bizarrely, in charge of big swathes of copyright law) got rid of those exemptions. So this petition was started to bring the White House’s attention to the fact that consumer freedom for a very important and widespread product–the smartphone–was about to be severely limited. A hundred thousand views later, and here we are.

The White House’s response is positive; it says in no uncertain terms that “The White House agrees with the 114,000+ of you who believe that consumers should be able to unlock their cell phones without risking criminal or other penalties,” and that “All consumers deserve that flexibility.” Great! And Sina Khanifar, in an emailed statement to me, says he thinks the response is “wonderful,” and “a big victory for consumers.”

But the White House’s response also makes it clear that this isn’t something the President can just sign to make it go away. The Obama Administration will have to work with the Librarian of Congress, the Federal Communications Commission, the wireless carriers (who are enormous and influential corporations), and Congress itself to institute a change. The White House isn’t waffling on where it stands, but that’s hardly the only (or even the biggest) battle to be fought here.

You can read the entire statement here.