Bald eagles, besides being majestic and graceful and standing for freedom and all that, have a pretty cool trick: they... 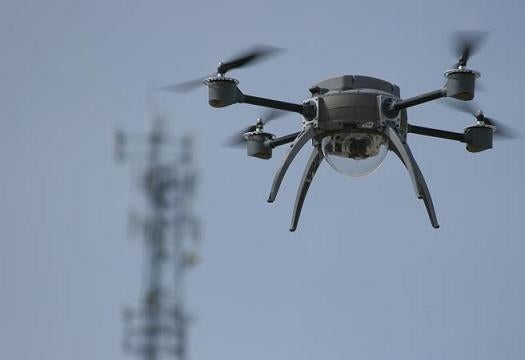 but it isn't as cool as a quadrotor drone that works like an eagle. Dkroetsch, via Wikimedia Commons
SHARE

Bald eagles, besides being majestic and graceful and standing for freedom and all that, have a pretty cool trick: they can scoop fish straight out of the water. Flying low, they extend their talons and grab the fish from below the surface, carrying it home for a triumphant feast. Now, scientists at the University of Pennsylvania in Philadelphia have made a drone that can imitate this same feat. Watch it in action below:

The drone in question is a quadrotor, a UAV that flies with four spinning blades, like a helicopter. Scientists like quadrotors because they’re stable in flight and can be easily modified. To make a quadrotor imitate an eagle, the scientists first studied how eagles catch their prey. Then, they attached a 3-D printed claw on a motorized leg to the bottom of a quadrotor.

The drone starts with the claw pointed forward, and keeps flying past the object as the claw latches onto its target and pivots backwards. That gives the claw extra time to make a secure grip, without compromising speed. New Scientist reports that the researchers had to develop some serious stabilization software to keep the drone flying with the added weight.

We’ve already seen quadrotors that can carry heavy payloads, perform light shows, and play catch. Imitating a bald eagle adds to an impressive suite of functions. In practice, a flying claw could at its most basic level get a Frisbee off a roof, and in more advanced applications pick up and retrieve tools from construction workers at elevation. Combined with those other capabilities (well, okay, not the light show), drones based off this technology could even be used for construction projects all on their own. When people talk about the inevitability of commercial drones, it’s these capabilities that make them really promising. Plus, it’s robot eagles. If Iron Man had a pet, it would be this.