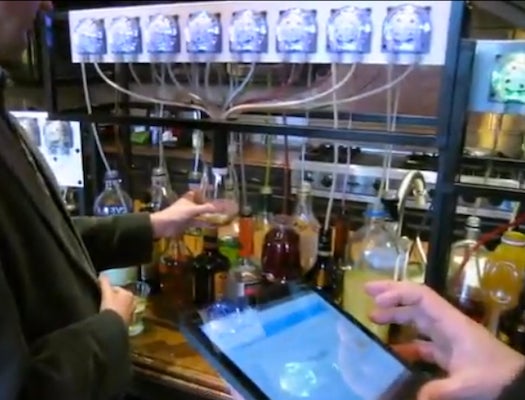 Ordering mixed drinks can be a crapshoot sometimes. Is that whiskey sour going to be the same from place to place? More importantly, are the proportions going to be right? Well, worry no more! Bartendro, the iPad-controlled, open-source, awesomely-named robo-bartender is here.

Built by the makers at Party Robotics, the ‘bot stores a library of drink ingredients and proportions and, at the tap of an iPad, uses custom-made pumps to consistently mix a drink the right way. It’s currently being funded on Kickstarter, and is fast approaching its $135,000 goal. Once it gets funded (because it looks like it will), the inventors say they’ll open-source the drink compendium, allowing anyone to add cocktails to the list.

Good news for drinkers, if not for bartenders. Let’s have a John Henry-style faceoff soon.