The Numbers Behind America’s Most Expensive Fighter Jet Ever [Infographic]

In this case, a picture is worth 1.5 trillion words 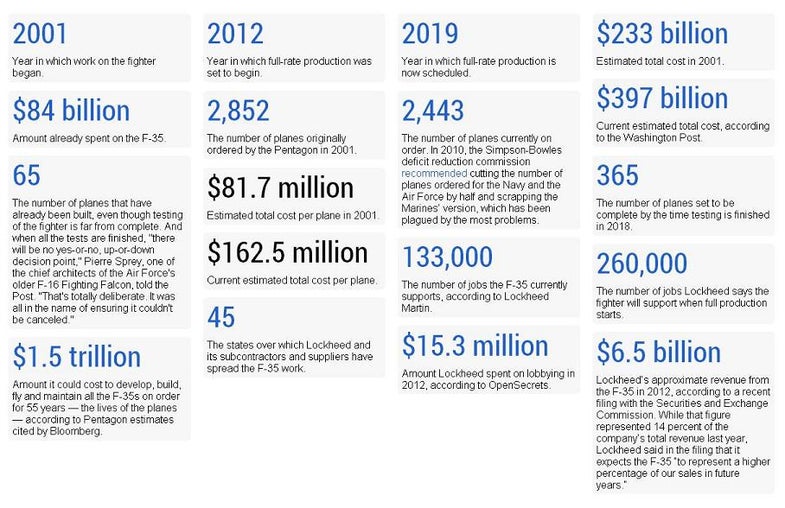 The F-35 Joint Strike Fighter is a long in-development, government-funded stealth fighter made by Lockheed Martin. Designed to replace up to seven different fighters, it could potentially do everything from night stealth missions to tank destruction to vertical takeoff, but it has been plagued by technological problems. Its other salient feature? It is the most expensive fighter jet developed. Ever.

Pro Publica put this infographic together presumably to highlight the absurdity of current budget logic at the Pentagon. So far the F-35 program has cost a whopping $84 billion, which is almost twice the amount the Pentagon is supposed to cut this year. Rather than rein in the F-35 program, Pentagon leadership has made cuts to a tuition program that in 2012 cost $194 million and reduced the amount of time the U.S. Navy spends at sea.

One important number missing from this graphic: 2,000. That’s the number of people who work for the Pentagon on the F-35 program itself. To give some context, Centcom, the U.S. military command office for an area encompassing the Middle East and Central Asia, and which oversaw both the Iraq and Afghanistan wars, also has a staff of 2,000.

Is it possible for the U.S. to ever attempt a military program more expensive? We have to wade into science fiction to find an example: the Joint Strike Fight is more expensive than Iron Man, but it is cheaper than a Death Star. Except, wait, the Obama administration already ruled that one out.