The sun will get in the way of Earth and Mars, blocking communications. 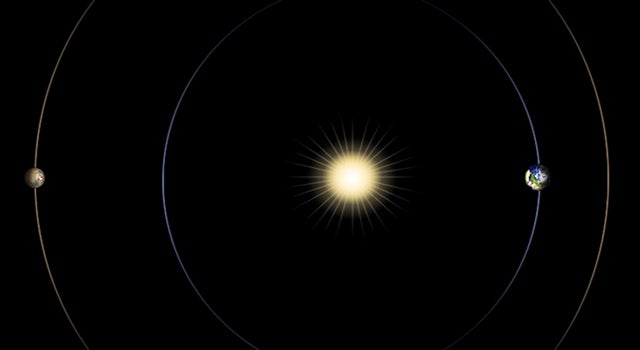 For the scientists and engineers working on NASA’s Mars program, an upcoming alignment of the planets presages some possible good news. Thanks to the sun, it’s spring break time.

Every 26 months or so, Mars and Earth are on opposite sides of the sun from each other, which means communications are lousy between the two planets. This is called a Mars solar conjunction. Basically what happens is the sun interrupts radio transmissions between Earth and the Mars rovers and orbiters. Data from the rovers might get corrupted as it travels past the sun, and likewise, commands from Earth could be hampered and misinterpreted by the Mars-based robots.

Each conjunction is different, with the planets in slightly different positions relative to the sun and each other, and with different levels of solar activity. This year at the conjunction’s height, Mars will appear to be only 0.4 degrees from the sun, as viewed from Earth (which you should not do unless you have a solar telescope). Though that means the planet isn’t totally blocked, it’s happening while the sun is in the middle of a particularly active phase of its 11-year cycle, so increased flares and sunspots could be even more problematic for radio transmissions.

To prevent any problems, the science teams managing the Mars rovers Curiosity and Opportunity won’t send any commands between April 9 and 26. The Mars Reconnaissance Orbiter and Odyssey orbiter will also fall somewhat quiet, listening to the rovers and recording data to send back home later. By May 1, MRO could have accumulated about 40 gigabits of data from its own science instruments and about 12 gigabits of data from Curiosity, according to MRO’s deputy mission manager, Reid Thomas of the Jet Propulsion Laboratory.

Opportunity will have about three weeks’ worth of pre-programmed science tasks, which it will execute throughout the conjunction. Curiosity’s managers will stop sending it any tasks between April 4 and May 1. But they’ll still be able to check in with the rover, which will send beeps to Earth every day.

Meanwhile, it’s a good opportunity for the science teams to catch up on sleep and even vacation, according to NASA.