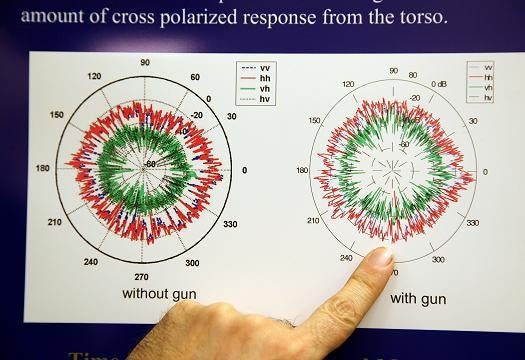 Sarabandi shows to the difference in the visual response from the radar to a person with a gun and without a gun. In the aftermath of the Newtown school shooting, a University of Michigan, College of Engineering professor Kamal Sarabandi envisions a new use for a weapons-detecting radar system he’s been developing for the past few years. The technology could potentially identify a hidden gun or bomb on an approaching person from the distance of a football field away in less than a second. Photo by Marcin Szczepanski/Multimedia Producer, University of Michigan, College of Engineering. Marcin Szczepanski
SHARE

The Defense Department funded Sarabandi’s research for years, because his technology can detect bombs under clothes. But now, after the Newtown school shooting, Sarabandi wants to see if his research could be used to find concealed guns in crowded places, including malls, airports, stadiums, and schools.

Sarabandi’s technology is a fresh take on existing radar technology, such as the radar police use to trap speeders. Sarabandi’s version works by bouncing radar waves off people. Radar signals bounce differently off of skin and metallic objects, so you can identify a gun–or something like a gun–by focusing the radar on a person’s torso and comparing the reading to a baseline reflection generated in the lab. A torso with a large concealed metal object reflects the radar back differently, and looks slightly off when compared with a regular torso, as illustrated by the image above.

In the future, Sarabandi says radar guns based on his method could scan crowds for people concealing bombs or guns under their clothes, and those people could be quickly pulled aside and scanned more rigorously. Right now, he is working on designing a smaller system for an army robot. The most promising peacetime application? Promising a faster alternative to metal detectors. No idea how accurate it is, though.

Watch Sarabandi explain his concept below: