Curiosity Is Back To Work On Mars, But Only For A Few Days

With its computer glitch solved, the rover is staying busy until the sun gets in the way. 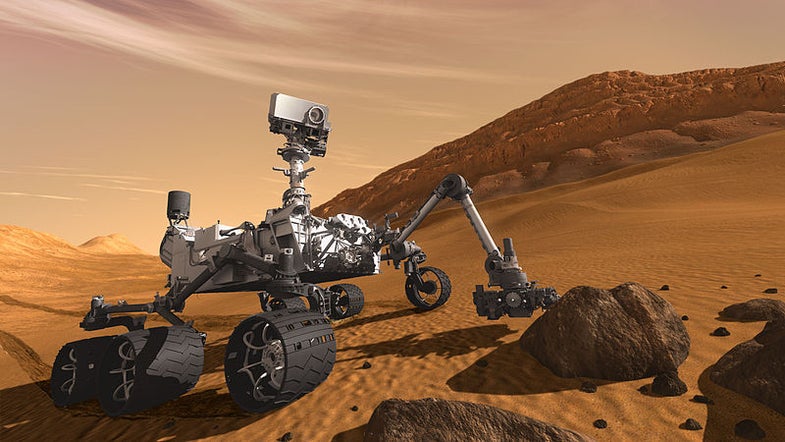 On August 6, the largest rover yet—the size of a car rather than a golf cart—will land on the Red Planet. Curiosity is carrying new equipment that will drill into rocks, analyze their chemistry, and look for compounds that support life. Wikimedia Commons
SHARE

The Mars rover Curiosity is back in action after solar radiation interrupted its mission a few weeks ago. It even swallowed some more dirt last weekend and is performing new analysis on it, according to NASA.

A computer glitch prompted engineers to switch the rover to its B-side computer on Feb. 28. Curiosity has a backup computer for just such events, but it’s been operating on its A-side computer for most of its mission. It used the B-side during part of its journey from Earth to Mars. Now the A-side is officially the benchwarmer. There’s actually a benefit to this switchover, though–Curiosity can check out the eight cameras that are hard-linked to that computer.

The rover has 17 cameras, and 12 of them are for engineering and planning. The 3-D Hazcams and navigation cams have two stereo pairs of cameras, with one pair linked to each computer. So now NASA can make sure the B-side cameras work, and they checked out OK.

All this is just in time for an upcoming blackout between Earth and Mars. The sun is going to be in between the two planets for much of April, so the rover team is putting communications on hiatus just to be cautious.

In some ways, Curiosity has already fulfilled its goals. It is in the beginning of a two-year (on Earth) mission to find out whether Gale Crater could ever have been home to life–and earlier this month, the rover’s science teams on Earth said the answer was yes. But countless more discoveries are still to come.