Could Google Glass Allow Us To Drive Our Wheelchairs With Our Eyes? 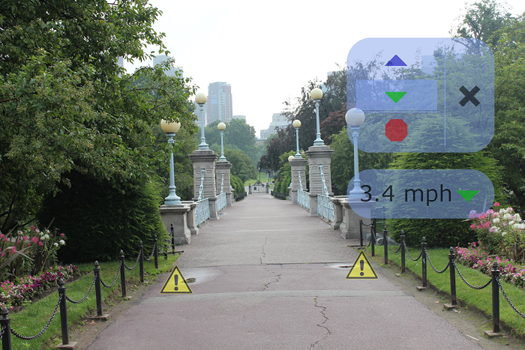 When Google launched their #ifihadglass campaign asking users to apply for early access to the augmented reality device, tech aficionados and cutting-edge eyewear fashionistas exploded with ideas — some annoying, some jokey, and some actually promising.

Steve McHugh, an engineer at the Boston-based e-commerce company Wayfair, posted this:

ifihadglass I would use the eye tracking technology described in US patent 8,235,529 to implement a Masters robotics lab project’s alternative mechanism for quadriplegic and other disabled persons to control their powered wheelchairs (start/stop, speed, turning) while displaying real-time feedback about their surroundings (dangers, obstacles, suggested routes).

According to a new interview with BostInno, McHugh got the idea from a robotics class he took as a Master’s student at Tufts University. For a group project, some of his classmates used an eye-tracking webcam to control an electric wheelchair. Depending on how precise Google’s eye tracking technology is, McHugh thinks that by a wheelchair could be controlled by just staring at buttons on the interface for a specific amount of time. The user could ideally know exactly how fast they’re going, whether there are potentially dangerous objects in their path and how much battery is left in the chair.

For a quadriplegic or paraplegic, being able to control a wheelchair’s movements freely without arms would be life changing. Or, you know, we could just use it to dictate emails while walking.