This Is The World’s Smallest Space Telescope

Today, scientists will launch two tiny satellites with telescopes on board. 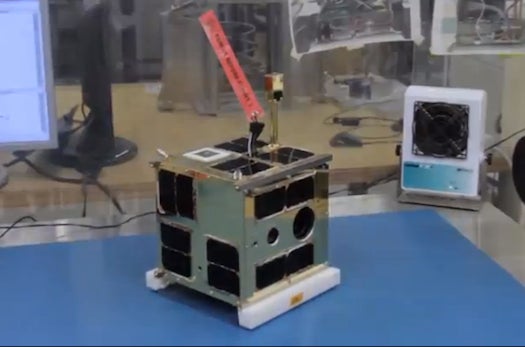 Sometimes a bargain satellite is best. Engineers have been making cubesats–cheap cube-satellites that hitch a ride onto rockets and are jettisoned into orbit–for a decade now, and today, another team of engineers will launch two more. The difference is, these ones will be outfitted with tiny telescopes, and they’re small enough to be the smallest space telescopes in existence.

The University of Toronto’s Space Flight Laboratory designed the twin satellites, which are cubes measuring 20 centimeters per side, and similar to “a very, very heavy lunchbox,” Manager of Aerospace Systems Cordell Grant says in the video above. The two satellites will be launch from a rocket in India and together they’ll be the first to form a “constellation” of satellites observing the brightest objects in space. The mission is called the BRIght Target Explorer, or BRITE, mission.

We can’t expect many amazing photos to come from these satellites; it’s not really their function. The BRITE satellites will observe stars and record changes in their brightness over time, which could be caused some other celestial object blocking its view or a spot showing up on the star. That doesn’t sound like much, but the tiny satellites could actually perform better than bigger and more expensive telescopes on earth, which have to account for weather and the obscuring effect of the atmosphere.

This sort of thing has been attractive to scientists for a while now. Not everyone has the cash–or the inclination–to plan a multi-million dollar experiment with a full-sized rocket. But these miniature missions make experiments cheap, and the better the technology we can stuff in a lunchbox, the better results we’ll see from these projects.