Watch it nimbly stride over wooden blocks, metal inclines and what looks like those foam puzzle pieces babies play with. 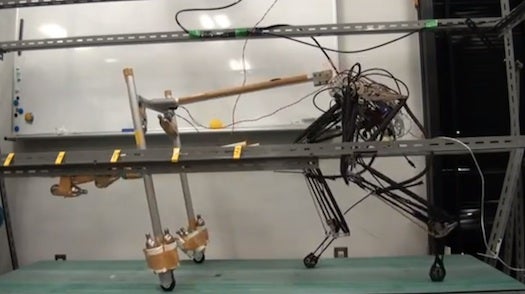 With its long limbs and slender body, this new robot looks a lot like a wild cat–a leopard, maybe, or a cheetah. In comparison, the U.S. Defense Advanced Research Projects Agency’s (DARPA) famed cheetah robot is practically obese.

For now, however, the DARPA cheetah is much more capable, using all four legs to run at speeds up to 28 mph. The “Pneupard,” on the other hand, doesn’t yet have working front legs and can only walk awkwardly. (It’s like a cheetah with a walker, as one IEEE Spectrum commenter noted.)

But Pneupard’s creators, a team of researchers from Osaka University in Japan, aren’t looking to race against the DARPA cheetah. Instead, they hope to learn more about natural cheetahs’ locomotive secrets, which in turn will help build more agile robots, Andre Rosendo, Pneupard’s lead developer, told Spectrum.

Pneupard is already able to handle unevenness on the road, which researchers demonstrated by slipping blocks of metal, wood and other materials under its feet as it strode along a treadmill:

The robot’s name comes from the fact that it has pneumatic, instead of mechanical, muscles. Pneumatic muscles are flexible, can handle impacts and contract the way biological muscles do, helping give the leopard-robot more “lifelike” movements, emphasis on like.

Rosendo and his team based Pneupard’s leg lengths and muscle movements on data they gathered from cheetah dissections and studies of the electrical activity of real muscles at work, they wrote in a description on YouTube.

They also wrote computer code so that the Pneupard’s legs don’t need explicit instructions on how to take every step. Instead, the robot adjusts automatically to information it gets from pressure sensors in its feet.