For the smart clothes and robot skin of the future 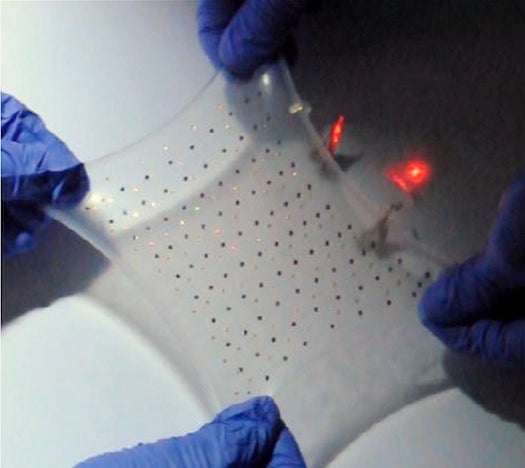 Boi-oi-oi-oing. Researchers have created a lithium-ion battery that keeps on working when stretched to four times its initial length–and bounces back into shape once you let go.

In the future, stretchy batteries such as these could help power solar-energy generating clothes, tattoos that monitor your vital signs, robot skin that’s sensitive to touch and other futuristic, flexible devices, the batteries’ creators wrote in a paper published today in the journal Nature Communications.

Think you can’t get away from email now? Wait til even your clothes are electronic.

Aaanyway, we’re not here now to talk about your digital life balance. We’re here to talk about how cool this battery is. And it’s pretty cool. It looks like a little chip, maybe the size of an SD card, and it’s made of a translucent silicone rubber material stamped with aluminum and copper electrodes and assorted connections. Its creators, a team of engineers from China, Korea and Illinois, hooked the battery up to a red LED light and demonstrated that it continued to work when folded, twisted, and stretched to the size of small notepad, then pulled over an elbow, like a large Band-Aid.

The experimental battery charges wirelessly and works for eight to nine hours on one charge. It can be recharged 20 times without losing any capacity.

Researchers have been working on flexible and stretchable batteries for a few years now. In 2010, for example, we saw a bendable battery stuck on a piece of paper. This new battery is able to stretch four times more than other batteries scientists have made, its creators wrote.