But this might be misguided, because people also think NASA gets way more money than it really does. 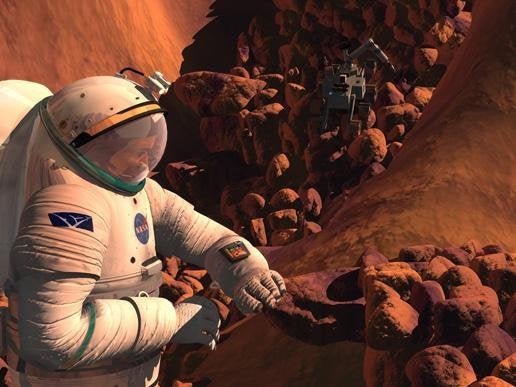 Here’s some optimistic news: 71 percent of Americans are confident humans will get to Mars in 20 years, according to a new poll. Here’s some disappointing news: Americans think NASA gets way more of the federal budget than it really does.

A nonprofit advocacy group called Explore Mars teamed up with a PR firm to gauge public opinion about Mars exploration. Americans are confident we’ll get there eventually, and once they were told there are currently two operational NASA rovers on the planet, 67 percent of people agreed the U.S. should send both humans and robots there.

Interestingly, the poll found that on average, people think NASA spending accounts for 2.4 percent of the federal budget. It’s really more like 0.5 percent. When people were told the real number, they overwhelmingly agreed, strongly or just “agreed,” that it’s worthwhile to increase NASA’s budget to a nice, whole 1 percent to finance this expected trip.

People think the biggest barrier to getting to Mars is affordability–73 percent said that–while 67 percent think politics are a major hurdle. Technological capability and motivation aren’t seen as major obstacles.

Why should we go there? The top three reasons are to understand Mars better, to search for life, and to maintain U.S. leadership, according to respondents. “This is a wakeup call to our leaders that Americans are still explorers,” said Chris Carberry, Executive Director of Explore Mars, in a statement.

The poll questioned 1,101 people between Feb. 4 and Feb. 6. It will be a few weeks until we can see the full polling data, which will explain how the answers break down across demographics. It will also be interesting to see how these questions were phrased. But still, it’s good to know people think we can do it. Now to pay for it….