Could This App Treat Depression?

A new company with a Harvard psychiatrist as inventor-in-residence says it's got the research to back up its claims. 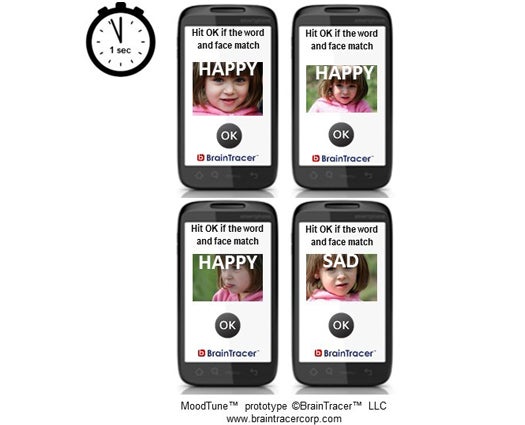 Diego Pizzagalli spent a good chunk of 10 years at Harvard doing what most professors at elite institutions do: research. Specifically, research on depression. He’s fMRI’d and EEG’d a lot of gray matter, but most of his work got stuck in the lab and never evolved into any real-world application. Then he developed something that was too good to let collect dust in the hallowed halls of academia: software that he says could help treat depression.

Now with the help of the Baltimore-based startup incubator Canterbury Road Partners, Pizzagalli is set to turn his lab invention into an app. MoodTune will be a series of simple games that when played regularly, can help treat depression, Pizzagalli and his colleagues say. Turn on the app for 15 minutes a day, play through some games, and maybe it could help. Maybe, they say, in some cases, it’d be all a depressed person would need. Could something that simple actually work?

Pizzagalli started working on depression in 1999 and released some of his most important papers in 2001. The papers focused on “biomarkers,” signals of response in the brain to antidepressants and psychotherapy. Take a peek inside the brain, and you can see areas light up–or fail to light up–in response to treatments. Whether an area lights up or not predicts, with considerable accuracy, whether a treatment works, he says.

So, the thinking goes, what we if we illuminate those regions another way? The brain could readjust appropriately without the need for a pill. The anterior cingulate cortex is associated with depression and also works when snap decisions need to be made, Pizzagalli says, so perhaps having someone make snap decisions would help treat depression. He developed desktop software in his lab to test it out and was happy enough with the results to delve deeper into the technology.

Software like that could make for a “bottom-up” approach to depression treatment. It could “strengthen the circuitry” of the ruminative brain. It could break the cycle of dwelling seen in so many depressives. It could be the first treatment of its kind to go on the market. But to turn the research into anything tangible took some extracurricular assistance.

Universities are well-equipped to do research: they have large staffs, top-shelf gear, and the greatest minds in their fields in a condensed area. And after the research is done? Well, they still have large staffs, but that stops being an asset. Sean Pool, a general partner at Canterbury, put it like this: “By and large, universities are these massive, inertial bureaucracies.” So why not take the inventors out of the Ivory Tower, team them up with entrepreneurs, have them form lean, Silicon Valleyish startups, and get their products to market faster?

There are plenty of ‘health’ apps out there that don’t function much better than a placebo, if that–but Pizzagalli insist there’s the science to back up BrainTracer.With Pizzagalli, Canterbury Road is doing precisely that. Pizzagalli originally approached Harvard about marketing the technology behind his research, but the process stalled until he moved to the university’s McLean Hospital, where administration suggested he partner with Canterbury. Canterbury set up a venture company for his research (Venture Launch Team No. 1), offered the CEO position to Andre Konig, an “entrepreneur in residence” who’s spent a decade working in consulting and more recently in private equity, and soon they had a name for the business (BrainTracer) and the prototype app (MoodTune). As for what Canterbury gets out of it? It holds a small stake in the venture.

Immediately, Konig and Pizzagalli got to work developing a business model, shopping around for investors, and designing a prototype. BrainTracer, if all goes according to plan, will launch its flagship app, MoodTune, by the end of spring. The idea is for Pizzagalli and other psychologists’ research to create an app that can help combat depression. On its face, that doesn’t sound like the most medically credible idea–there are plenty of “health” apps out there that don’t function much better than a placebo, if that–but Pizzagalli insists there’s science to back it up. BrainTracer officially launched Monday, but before the app is released, Pizzagalli and Konig will also send it through a medical trial to test for its effectiveness. The pair is hoping to snag an National Institute of Health grant for “cognitive training” software.

When MoodTune is out, this is how it’ll work: You’ll open the app and be directed to a simple game (there are “six or seven” games so far Konig says.) The images you see here are from the prototype, but the final version will probably be similar. Here’s the example Pizzagalli gave of a game that could be used for a “workout.” A face appears onscreen. The user–or patient, depending on your thoughts about the app–looks at the face as words flash above it: “Happy.” “Happy.” “Sad.” “Happy.” The user gets slammed with some serious cognitive dissonance as they try to reconcile the faces and words. After the user is done, he gets a review of his score for the game, as well as his overall progress in treatment. 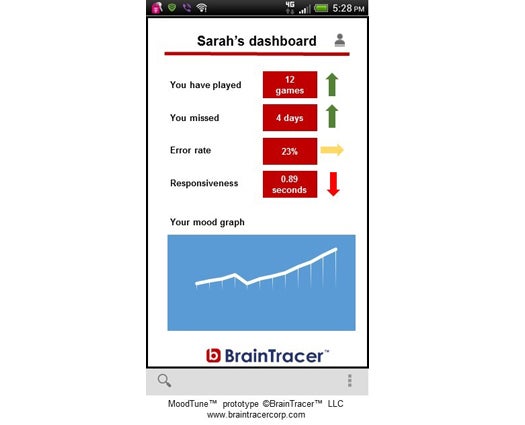 Pizzagalli and Konig aren’t the only ones looking into similar “cognitive training” approaches in mental health. A 2003 study into cognitive training techniques in schizophrenia noted that the approach showed “effective components that hold promise for improving cognitive performance.” Multiple studies in the Journal of the American Medical Association have found modest increases in brain function apparently spurred by cognitive training.

Still, the idea that brains can be successfully “trained” is more than a little controversial. Lumosity, a series of “brain training” software products, has been maligned for selling digital snake oil. The software is pitched as a set of simple games that can improve everything from memory to concentration (and that its games are backed up by neuroscience, too). When the consumer group Which? asked a panel of scientists to explain the effectiveness of neuro-gadgets, including Lumosity, the scientists concluded there was no evidence to back up the claims. At best, they said, the training would help about as much as a crossword puzzle or round of _Space Invaders_–nothing especially brain-empowering about it.

So what’s different? Precision, for one, Pizzagalli says. Instead of trying to play the full court, they take a position: the app, unlike Lumosity, only focuses on depression. That focus gives it an edge. Pizzagalli is also shooting for openness. MoodTune will have a dashboard feature that can give the users more information about the app and updates on their progress. Users will also be able to respond to BrainTracer about the app, letting the team know how well it’s working.

A 2003 study into cognitive training techniques in schizophrenia noted that the approach showed ‘effective components that hold promise for improving cognitive performance.’Either way, expectations are at least a little tempered. The app, they say, could only work on its own for people on the margins of clinical depression, not meeting all the criteria to make it official but still exhibiting some of the symptoms. Modest gains are what the team is hoping for, but they’re optimistic enough to have laid out a business model for the app. And if the technology isn’t the same as Lumosity’s, the tiered pricing model is at least similar. Pay for access for a few months with x dollars, or upgrade to a few more months for y dollars. For BrainTracer, that might mean tiers from $30 to $50 monthly.

That could make it cheaper than the cost of depression medication (and possibly more fun to take).

That’s in the pro column. In the minus column, the question might eventually be: How do we sell this app? There are similar-sounding apps out there based on shaky science at best. On Google Play, for instance, you can download so-called “binaural beats,” apps designed to alter one’s state of mind. Need some creativity? Tap. How about just some relaxation? Tap-tap.

Apps like that don’t have the science to back them up, and certainly didn’t go through a trial process in line for an NIH grant, so there’ll be some pressure for MoodTune to distinguish itself from them. The dashboard system in MoodTune could help out, Konig says. After each game, the users can have the science behind the game explained to them. That’s something a lot of other apps can’t offer–or at least can’t offer as easily. They’ll also be mostly marketing the app to institutional clients like government organizations, rather than just individuals, meaning the standard of proof for the app is higher but it’ll reach more people once the bar is reached. (Along with investors, they’re looking to the crowdfunding site Indiegogo to help pay for it.)

On the other hand, if there’s a market for enhancing creativity, there’s definitely a market for fighting depression. Tens of billions in productivity costs are lost every year to the illness, and fighting it is a multi-billion dollar industry itself. Plenty of people out there are willing to try out new treatments, whatever they look like.