Coming Soon To The Coolest Classrooms: A Box Full Of Robots

A new teacher's kit designed to make it easy and affordable (relatively speaking) to bring robots to school. 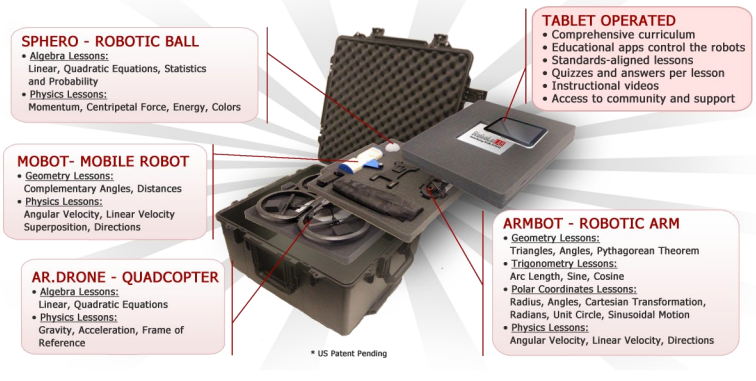 Learning algebra with a robot sounds way better than learning it with flashcards, right? I know I would have had a better time learning quadratic equations if I was using them to do something actually interesting, like figure out a quadcopter’s viewing area. That’s the goal of this new robot-filled box made by a company called RobotsLab.

The Box–that’s its name–comes with four robots, many of which are familiar: The fun AR.drone, the Sphero robot ball, a Mobot two-wheeler, and a robotic arm. You also get a teacher tablet full of apps and videos that contain the lessons, a teacher’s book, quizzes and printable student assignments.

To answer the questions, students will have to solve equations, understand scientific forces and think like an investigator. In other words, they have to learn math and science.

It’s a cool concept for a better science, technology, engineering and math curriculum. The only catch seems to be that robots aren’t cheap: The Box will set a teacher back $3,500. As IEEE points out, you can buy the ‘bots and a tablet off the shelf for about $2,000. The included lessons are obviously of value, but it would be up to a teacher to decide just how valuable. It launches this week at the Texas Computer Education Association conference.