It's a GIF. Or a video? It's kinda fun, anyway. Get ready to see looped, lightly edited video in your Twitter feed. 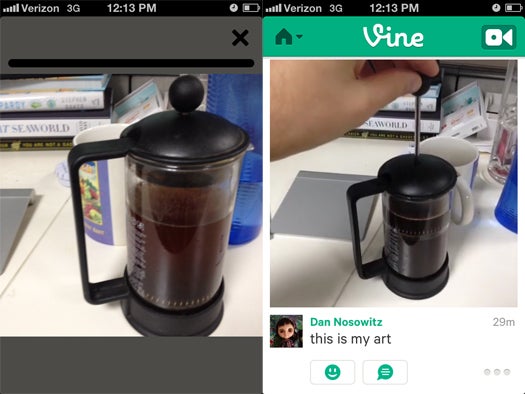 Twitter just launched Vine, a new standalone app for the iPhone and iPod Touch that also integrates into your Twitter timeline. It’s the latest in a long line of “the next Instagram” attempts–not too different from Cinemagram, an app which had a mild and short-lived vogue last year and allowed you to make short GIFs.

But instead of a GIF, a “Vine” is a short, 6-second-maximum looping video, which, unlike Snapchat or Poke creations, does not self-delete after a few seconds. You simply touch your finger to the screen to start recording, and lift it to stop recording. Easy! The major advantages to Vine are thus: it includes audio; it allows limited editing (you can tap and hold the app multiple times in one Vine, allowing a string of short clips), and it’s embedded in Tweets just like an image. When you scroll through Tweets in an official Twitter feed, you’ll see the Vine right there.

But Vine also has some kind of confusing disadvantages. Vines do embed in tweets, which means you can embed an entire tweet in a website, but part of the beauty of GIFs is that they’re supported by virtually every application that supports any kind of images–except Twitter. Vines won’t paste in chat rooms or emails or most other places, but they will embed on Twitter.

The app also has a few problems–people are having issues downloading and running it (it seems to force close for some people, though I’ve had no trouble with mine). It also does not support the iPhone’s front camera, which makes no sense. But more importantly, it’s just one more social network–you have to add friends manually for them to show up in your Vine app’s feed (for some reason it doesn’t pull in friends from your Twitter feed, though it has access to that), and remember to check it, and remember to make a Vine instead of a Twitter picture or Instagram or Snapchat or, Christ, there are so many of these now.

I’ve liked some of the Vines I’ve seen, but it doesn’t seem to me that the advantages over a GIF make up for the negatives. But who knows! Maybe it’ll catch on. You can download it here, for free.