A fitting tribute to the open-information pioneer who took his own life last week. 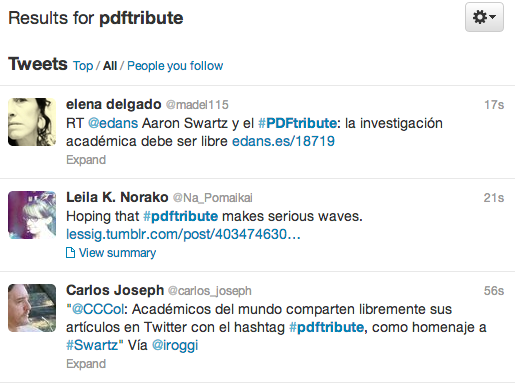 Aaron Swartz was an internet pioneer, a crucial part of the creation of RSS, Reddit, and Creative Commons. He was also, as of this past Friday, under investigation for allegedly taking millions of documents from JSTOR, an online directory of scholarly articles, with the presumed intention to publish them publicly and freely. But on Friday, Swartz was discovered dead in his Brooklyn apartment, having hanged himself.

As tribute, many of his fans and followers have begun posting links to research and academic papers, which are being collected by a new site. Swartz was a relentless proponent of open information; he fought repeatedly against JSTOR due to its tendency to charge the public for scholarly articles and pay the proceeds to publishers rather than authors. His stance was that these articles should be available to the public, for the public good, and that certainly if there is money exchanged, it should go to the authors rather than publishers.

At the time of writing, PDFTribute has over 1,500 collected links, ranging across all subjects. You can check them out here.