Curiosity may get all the kudos these days, but the wizened Opportunity rover continues to log miles on the Martian surface. 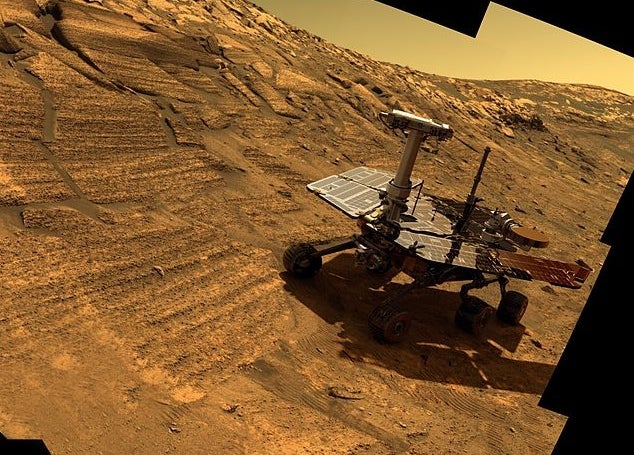 Today on Mars the robotic rover Opportunity (that’s right, Opportunity–remember when we all used to care about Opportunity?) is hitting a major milestone. The rover touched down on the surface of Mars Jan. 24, 2004, just three weeks after its sister rover Spirit landed elsewhere on the planet. That makes today the beginning of Opportunity’s tenth year of Mars exploration–not bad for a machine that was designed for a three-month mission.

Spirit and Opportunity were sent to the Red Planet in search of signs of its hydrological history (and, therefore, potential past life). Spirit made perhaps its biggest contribution in 2007 when it uncovered a long-defunct hydrothermal system in Gusev crater, an indication that Mars was once home to both liquid water and an energy source, key ingredients for life as we understand it. But in 2010 it became stuck in a bed of soft sand and couldn’t reorient its solar panels in a way that would allow it to survive the Martian winter. Attempts to revive it during the Mars spring of 2011 failed and it was pronounced dead.

Opportunity enjoyed its own brush with death back in April of 2005 when it too became stuck in a sand dune. NASA mission operators spent weeks doing simulations back on Earth before finally figuring out how to rock Opportunity free and get it moving across the surface again–and it continues to roll to this day. It is currently exploring the rim of Endeavour Crater, a geological environment rich in clay deposits that may have once been capable of supporting microbial life.

Both rovers, of course, far outlived their three-month design lives. Opportunity has now logged 22.03 miles on Mars since touching down, and with the exception of some expected wear and tear engineers say the rover is still in excellent shape. In fact, Opportunity very well may soon overtake the Soviet lunar rover Lunokhod 2 for the all-time record for most distance traveled on another planetary body (Lunokhod 2 traveled 23 miles across the moon in 1973). By comparison Mars Rover Curiosity, even with its tendency to dominate the headlines, still has a long way to go.