Should We Establish National Parks On Mars?

There’s a movement in the scientific community to create managed preserves on other planets and moons, to keep them pristine for future generations. 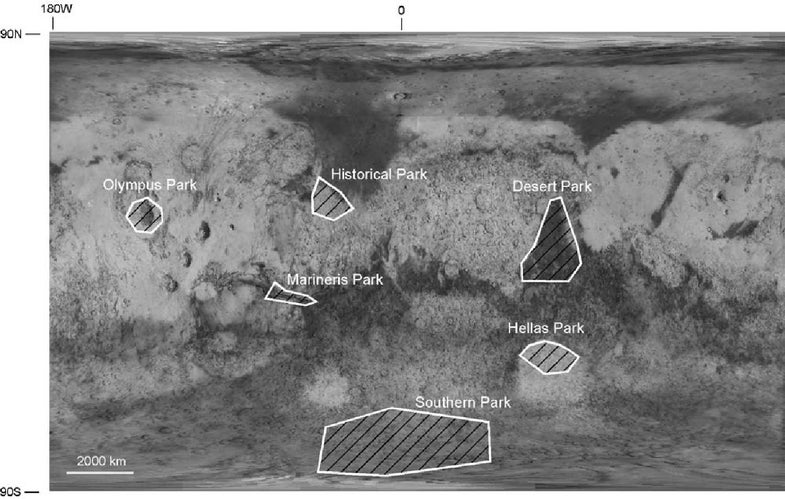 There’s an old proverb that states “We do not inherit the Earth from our ancestors, we borrow it from our children.” And if some in the scientific community have their way, that sentiment will extend to other planetary bodies as well. A movement among some in the spacefaring community believe that humans need to set up a kind of national parks system for planets prior to human and further robotic exploration to ensure that pristine environmental value–both scientific and intrinsic–is preserved beyond Earth orbit.

Earth orbit might be a good example as to why. The area of space where human activity has been most prevalent is filled with debris–the leftovers and byproducts of our presence there. And with private spaceflight now rapidly making up technical ground on even the world’s most capable space programs, it’s only a matter of time before manned exploration is happening elsewhere in the solar system and outside of the strict oversight of a state-sponsored space agency, advocates argue.

Therefore, given the fact that we have already mapped and extensively studied our closest planetary neighbors (like the moon and Mars) and we know what kinds of geologic features and areas are most valuable from both scientific and intrinsic standpoints, we should cordon off certain areas of interest within which exploration is either forbidden or restricted. For instance, Mars possesses various geographic regions like mountain ranges, deserts, polar ice caps, extinct volcanoes, and the like. And they could be scientifically interesting not just now but further down the road as we learn more about the universe.

So why not preserve sections of them now, as we do on Earth (at least somewhat) for our great forests, jungles, gorges, mountain ranges, wetlands, and so on? Such park designations wouldn’t have to render these areas entirely off limits for exploration, of course, but would create rules like no landing of unmanned spacecraft, no spacecraft or human debris left behind within the park, and more rigorous sterilization standards for any object crossing the boundary to mitigate microbial contamination.

In the land and resource grab that very well may be in the offing on bodies like the moon and Mars, advocates say, having a parks framework already in place could quell future potential-use conflicts and ensure that irresponsible exploration is limited to the spaces outside of the most scientifically interesting regions of planetary bodies. If you have thoughts on this (or some really good spam!) drop them in the comments below. We’re interested to hear what you think.