Google has put North Korea on the map. Literally. 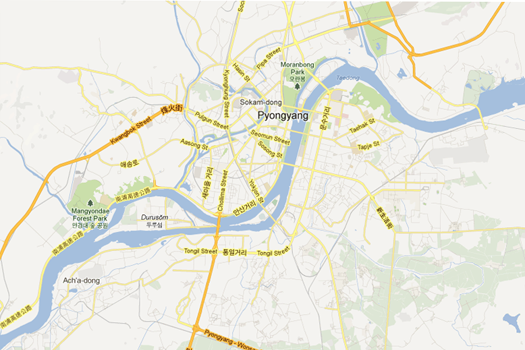 You can now see North Korea without ever leaving your living room. New data added to Google Maps has made it possible to virtually explore this notoriously isolated country.

Until recently, most of North Korea had largely appeared as blank white space on the maps service. But using Google Map Maker, “citizen cartographers”–ordinary people, mostly from outside North Korea–added roads, names and details to the North Korean map, according to Google Maps blog.

They contributed labels for prison camps and nuclear research sites along with schools, government buildings and theaters.

You can even burrow all the way down to Street View in some places to catch a ground-level glimpse of buildings, playgrounds, subway stations and propaganda billboards. The photos aren’t always recent (one was time-stamped in 2008) but — baby steps, right?

Google Map Maker, the company’s crowd-sourced cartographer, has been around since 2008 and has previously built maps for countries like Iraq and Afghanistan. User-submitted data is fact-checked by Google before it ends up on Google Maps. In the case of North Korea, data was checked against satellite images.

During his visit to North Korea earlier this month, Google chairman Eric Schmidt urged North Korean officials to open up the country’s tightly controlled Internet. Many of the contributors to North Korea’s map were from South Korea, according to the BBC. Only a few hundred people in North Korea are allowed Internet access.