TVs Will Soon Tell Us Exactly What We Want To Watch, No Channel Surfing Required

Imagine if your TV did all of the work for you. Soon, that could be a reality. 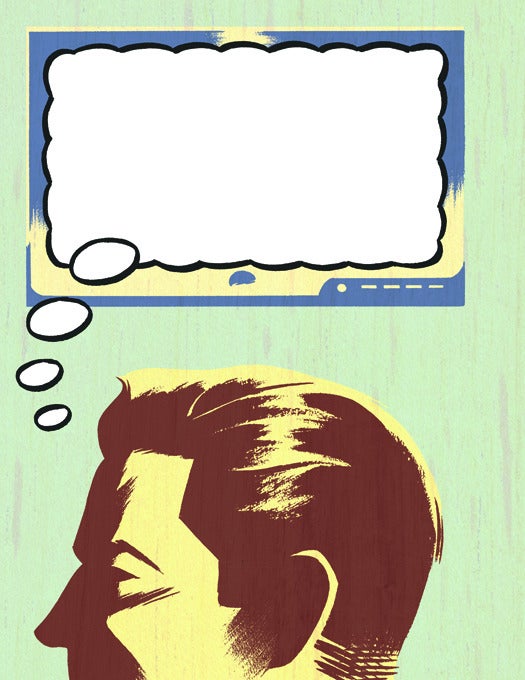 Twenty years ago, Bruce Springsteen lamented “57 channels, and nothin’ on.” Today, 57 channels would be a relief: Between cable, broadcast, and Web services, we have tens of thousands of individual programs to choose from, and no good way to figure out what to watch. In the early days of the Internet, surfers were just as confounded. Then search engines arrived and made it easy to find information. A similar change is now occurring in television—and it promises to deliver viewers from painstaking channel surfing to perfectly tailored programming.

Some set-top-box companies have taken the first steps toward creating broader recommendation engines. Last fall, Roku and Google TV debuted search functions that index across several sources, including Netflix, HBOGo, and Amazon Instant Video. And a few services, including the Peel remote-control tablet app, can make recommendations based on the shows and genres that users flag as their favorites. The trouble is that the searches are limited, and viewers still have to do all the work—tell an app who they are, what they like, and what they’re looking for.

That may not be the case for much longer. Sam Rosen, a technology analyst at ABI Research, says that in the coming years, smart set-top boxes will automatically learn preferences. These services will keep tabs on a viewer’s choices and make recommendations based on them, the same way that Google and Bing use a person’s search history to rank search results.

Video recommendations could eventually surpass the sensitivity of Web-based search engines, and adjust for each person in a household. In the average U.S. home, four people share the same TV screen. Disparate ages, tastes, and interests mean suggestions based on a single set might range from Dinosaur Train to The Grudge.

Microsoft Research, for example, has developed Kinect-based facial recognition that will help the console detect who’s just plopped down on the sofa. From there, the system could select movies and shows specifically for that person, providing each viewer with a custom, automatic listing of what he wants to see. No surfing necessary.