Today On Mars: Where Curiosity’s Cruise Stage Crashed Down

Cameras on the Mars Reconnaissance Orbiter have taken pictures of the impact sites. 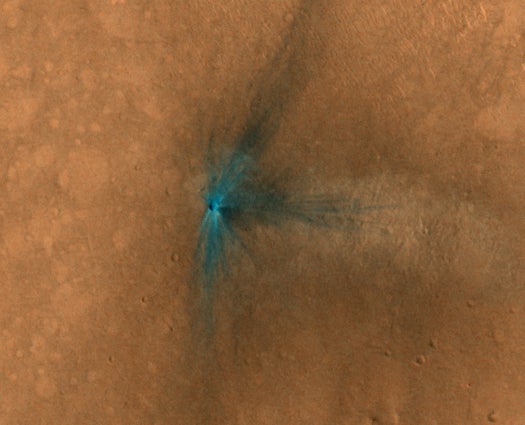 When the Mars Rover Curiosity left Earth, it was carrying a cruise stage, whose parts included a sun sensor and star scanner, propellant tanks, and a couple antennae. The craft released the cruise stage, along with two 165-pound blocks of tungsten ballast, to gain some aerodynamic lift right before it hit Mars’ atmosphere, preparing for the “seven minutes of terror” it would take to reach the surface.

The blocks and cruise stage landed 50 miles away from where Curiosity itself landed. The Mars Reconnaisance Orbiter has captured images of these impacts.

Mars has plenty of impact scars, but usually scientists don’t have access to details about the objects that hit the surface. Knowing information about the initial size, velocity, density, strength, or impact angle of the objects–the tungsten blocks and the cruise stage– will help NASA scientists understand impact processes and the properties of both the atmosphere and surface of Mars, which will be helpful, especially if we ever move there.